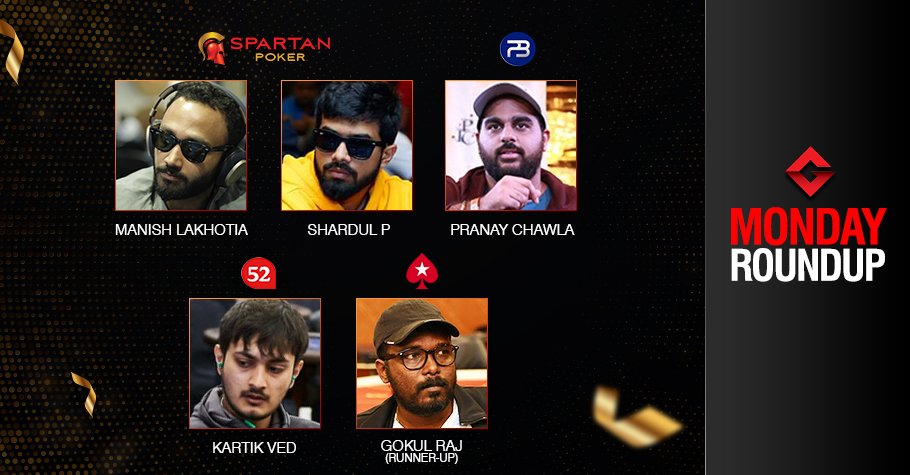 
After a smashing Sunday night, the action continued in a slow pace. The Spartan Super Series (SSS) is underway on Spartan Poker with highlight of the day, ReCharge assuring INR 18L. The Adda52 Online Poker Series (AOPS) also concluded on Sunday and yesterday was all about the daily feature tourneys. And here we have a list of prominent names in the industry bagging titles on Monday night…

The COVID-19 pandemic has taken over the world, shutting industries, workspaces, sending individuals to isolate themselves. This has led to the increase in number of players online. Well, Spartan Poker hosted SSS #33 ReCharge INR 18 Lakhs GTD which garnered a massive field of 1,058 entries after each paid INR 2,200, eventually smashing the advertised guarantee. The top 95 finishers locked themselves a share from INR 21.16 Lakhs prize pool and the one to conquer the list was ‘corona virus’ who defeated ‘dhiru91’ in heads-up to bag the winner’s cash prize.

At 9:30, Spartan Poker hosted Deep Freeze INR 8 Lakhs GTD which pulled out a total of 131 entries for a buy-in of INR 6,600. The final prize pool was shared among the top 17 places and it was after a long time that Manish Lakhotia aka ‘thekid’ pounced to capture the first-place prize money. Lakhotia was the last man standing after he outlasted ‘borntrouble’ to ship the tourney and boost his poker bankroll.

PokerBaazi’s Monday flagship tourney The Bout INR 10 Lakhs GTD attracted 567 entries crushing the guarantee to generate INR 14.4 Lakhs in prize pool. The top 72 players earned at least INR 4,464 and it was circuit grinder Pranay Chawla aka ‘setmeup’ to seize the first-place prize money of INR 2.72 Lakhs after he defeated ‘Apocalypto’ in heads-up who ended up earning INR 1.91 Lakhs for settling in the runner-up position.

Kartik Ved who goes by the name ‘Pegasus1505’ on Adda52 took down Inception INR 10 Lakhs GTD last night. The entire tournament fetched a pretty good field such that the guarantee was crushed to collect INR 15.10 Lakhs in prize pool. Ved eliminated his opponent ‘Vaibsaarav’ in heads-up for INR 3.7 Lakhs in prize money while his opponent walked away with INR 2.19 Lakhs.

PokerStars’ headlining Monday tournament was Monday Hustle INR 10 Lakhs GTD that saw 197 entries after each paid INR 4,400. Coming out on top was ‘tks5432’ who captured INR 1.62 Lakhs after the players settled for a heads-up deal which saw online reg Gokul Raj aka ‘Haxton Jr’ in the second position securing INR 1.78 Lakhs.

Keep reading GutshotMagazine.com to know the latest poker updates and promotions in the country.