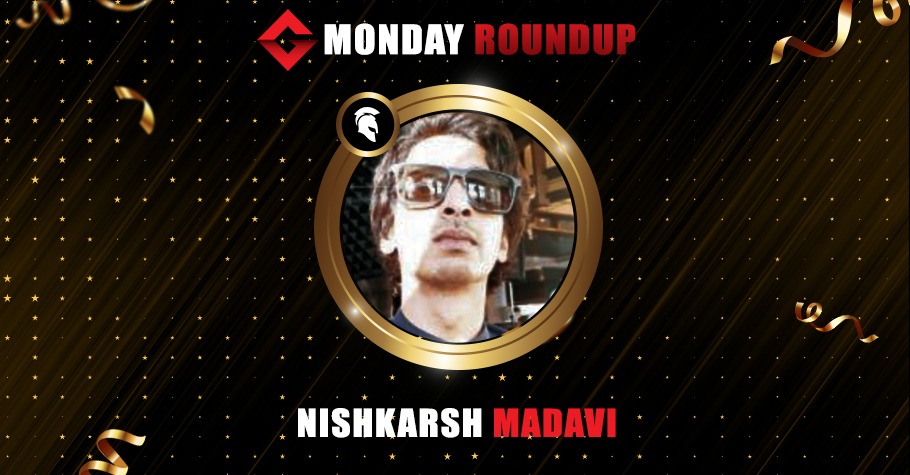 Monday Round Up: Nishkarsh Madavi Among Others Clinched Titles Yesterday

Adda52 hosted its staple Iron Man tournament to beat the Monday blues. The tournament had 355 entries in total. The top 38 players made it in the money in this ₹2,200 buy-in event. A min-cash of ₹4,800 was paid. The event was nailed by a mystery player who goes by the moniker ‘confabhi.’ This player took home a whopping ₹2,00,000 in prize money. The runner up in this event was also a mystery player, ‘Fletcher03’ who took home ₹1,21,200 in prize money.

The Big Show tournament on PokerBaazi was a deal between Devashish Jain aka ‘Deadmansong.’ Jain and Arjun Bhadauriya aka ‘TheMathematician.’ While Jain cashed ₹1,28,000 in prize money, Bhadauriya took home ₹1,19,000. The tournament had 335 entries in total. The top 36 players made it in the money. A min-cash of ₹5,695 was paid in this ₹2,750 buy-in event. The advertised guarantee of this tournament was crushed and the final prize pool stood at ₹8,38,000.

The Recharge tournament on Spartan Poker was a deal between Nishkarsh Madavi aka ‘Yeezy’ and an anonymous player ‘TipsyGypsey.’ Madavi took home ₹1,48,3030 in prize money while the anonymous player cashed ₹1,34,816. The tournament had 337 entries in total. The top 31 players made it in the money. A min-cash of ₹7,040 was paid.