World Series of Poker (WSOP), famous for its iconic annual action-packed festival at Las Vegas, is also involved in Circuit events which are hosted across American casinos. WSOPC, as it is known in its short form, recently hosted a series at Harrah’s Cherokee in the state of North Carolina.

One of the events of the series, $600 NLHE, attracted a total of 391 entries which brought the prize pool to $201,365. American pro Maurice Hawkins shipped this one and earned his 12th WSOPC gold ring, and $44,297 (~INR 30.82 Lakhs) in prize money. He is one of only two players to have achieved this feat, other player being Romania’s Valentin Vornicu.

Hawkins is currently 2nd on the Missouri All-Time Money List and has around $3.7 million in live cashes. His career best live score of $279,722 was bagged in 2016 at the same venue of Harrah’s. The journey for Hawkins started back in 2008 when he won a WSOPC event at Harrah’s Atlantic City. Hawkins, with his 12th ring, also now holds the record of earning the most cashes in WSOPC.

Hawkins, who lives in Flordia, later told the press, “It’s not really about the top spot. I still got the most money earned, most everything on the WSOP Circuit, so it’s pretty much the standard, but that makes me feel like my game has evolved to where it should be. I look forward to bigger and better things. It’s all about positivity and good flow of things going the right way.” He even tweeted about his victory: 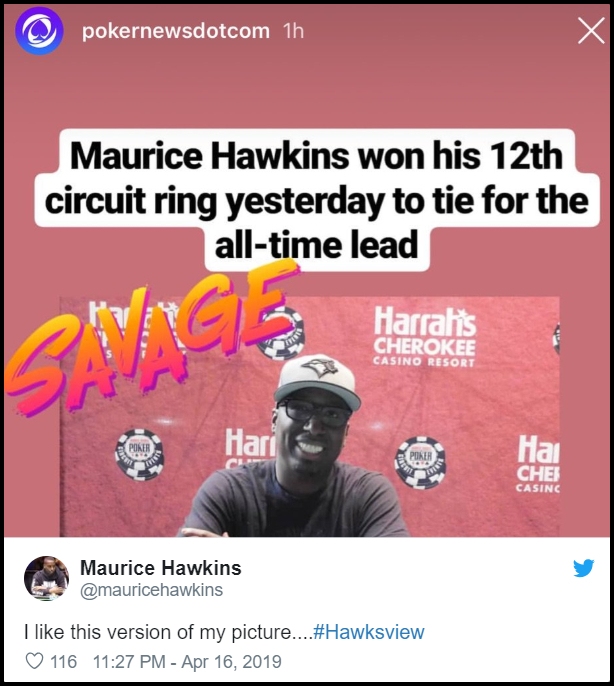 The bubble boy of the Final Table was Chris Conrad who earned $3,391 and after his bust, the 9-max FT kicked off. Eventually, the heads-up was reached between Hawkins and LaVann Williams. The runner-up, who is from Alabama, eventually settled for $27,376 as second-place cash prize.