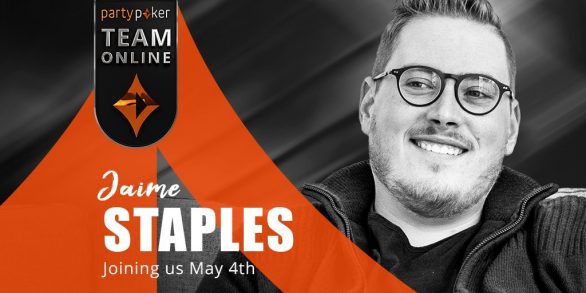 Jaime Staples to join partypoker Team Online on 4th May


partypoker, a brand that arguably is one of the industry leaders in the worldwide poker industry, has recently launched ’Team Online’ in an effort to widen its footprint in the online poker scene. Since last month, the brand has added Matt Staples, Jeff Gross and a bunch of others to the team, all well-established Twitch streamers with huge fan following.

In latest news, partypoker announced that Jaime Staples, brother of Matt Staples and a Twitch streamer himself, will join the fresh Team Online on 4th May 2019 as the 11th member. Staples is one of the most popular poker streamers in the world and his addition to the team will prove to be immensely beneficial to the brand. Jaime was associated with PokerStars until last month when he quit the brand.

Staples is a Canada native and is oldest of his four siblings. He will join partypoker exactly 3 weeks before his 28th birthday. Jaime, with his brother Matt, famously won $150k from Bill Perkins, who had promised them the amount if they weigh within one pound of each other within a year. Matt weighed around 134 pounds at the time of the bet, which means he gained a significant amount of weight and Jamie weighed around 305 pounds, shed a hefty part of his weight to win the bet.

Coming to Jaime’s online reputation, he has over 120,000 followers on twitch and boasts more than 45,000 followers on Instagram. He is also approaching 32,000 followers on Twitter. You can check his Twitch channel here. His addition to the team, which already has online heavyweights, will be a huge step forward in partypoker’s online strategy. Jaime even tweeted about this development: 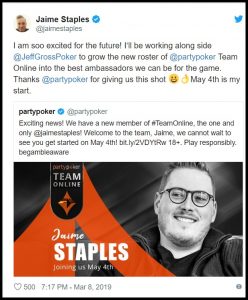 partypoker, going in line with its plan, also hooked up with Bill Perkins’ The Thirst Lounge, a twitch streaming channel launched in 2016 that encourages viewers to ‘live their best life.’ The brand is also preparing to include a high stakes cash game that will see some of the biggest names in poker invited to compete on its website. This will also be live streamed across the globe.

partypoker already boasts the likes of Fedor Holz, Mikita Badziakouski, Timofey Kuznetsov, Bruno Fitoussi, etc. as ambassadors of the website. The community will see major online presence from partypoker in coming months. Keep reading GutshotMagazine.com for more such community news and general poker news from around the world.