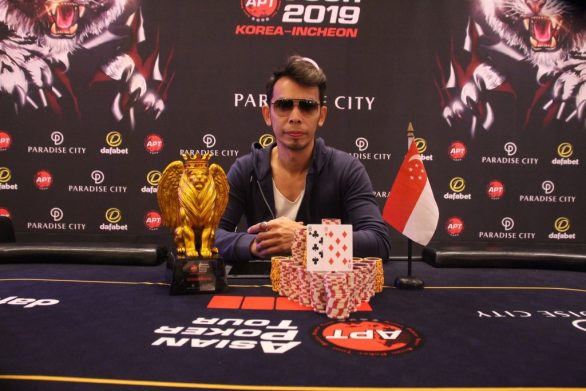 
The Asian Poker Tour (APT) is among the top names in live poker in Asia, hosting several events throughout the year at various locations. The most recent of them was APT Korea Incheon 2019 which took place between 2-13 August 2019, recently ending with a few winners being declared on the final day.

This created a massive prize pool of KRW 382.3 million but only the top 22 players from this field finished in the money, with Singapore’s Graeme Siow Wei Lik ending as champion and taking away the biggest prize of KRW 84,951,000 (~INR 49.95 Lakh). This was his first major live title and also his largest live career win.

When Siow entered the final day, he was the chip leader. He then took the lead through the FT and even to heads-up, where he faced Japan’s Go Saito. Eventually however, it was a heads-up deal that ended the tournament, giving Saito KRW 73,519,000 for second place and making Siow the second player from Singapore to win the APT Championships Event.

The next APT event is the APT Philippines 2019 which is scheduled between 11-22 September 2019 at Newport Grand Wing, Resorts World Manila, Philippines. For all updates on that series and other major poker tournaments from around the world, stay tuned to GutshotMagazine.com.

Sign-up to PokerSaint (use code “GUT100”). Also, check out our online poker rooms section, where you can read reviews on the biggest and best poker rooms in the country, while also taking advantage of their bonuses and promotions. Check out these top poker rooms HERE.