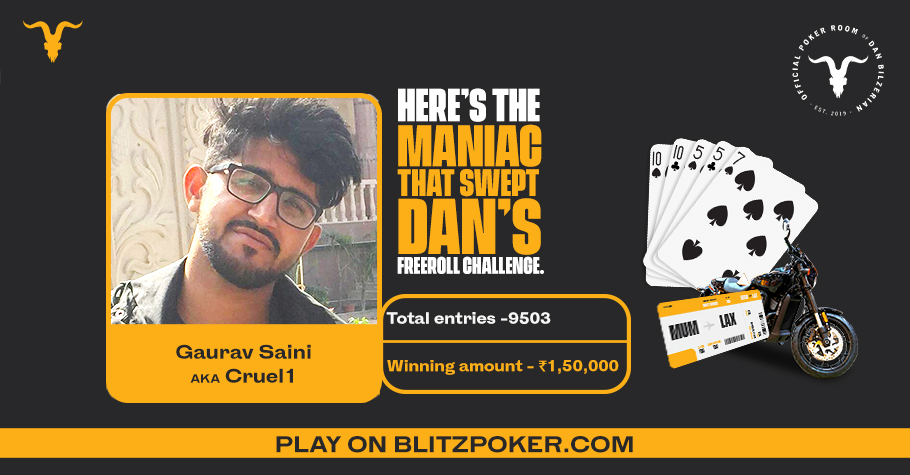 
What an electrifying weekend it was! BLITZPOKER (sign-up using code “GSBLZ”), launched a couple of weeks ago in India, hosted a whopping INR 10 Lakhs GTD Freeroll poker tournament. Lighting up the virtual felts, it was not just about the cash prize, adding cherry on top, the site offered a stunning Harley Davidson to the ultimate champ along with an all-expense paid trip to Los Angeles. Poker enthusiasts around the country know by now that the brand is associated with American actor and poker player, Dan Bilzerian.

Those of who enrolled on BLITZPOKER must have made a slice from the 1 million prize pool guarantee tourney on 22 August. But the one to party with The King of Instagram in LA is Gourav Saini aka ‘Cruel1’ who was quite overwhelmed after his win. The champion outlasted a monstrous field of 9,503 entries and clinched to the INR 1.5 Lakh in top prize. Gutshot caught up with the 29-year-old, New Delhi resident who said, “It’s ineffable! It was one heck of a roller coaster ride filled with adrenaline.”

Saini has been playing poker for over four years now and this is his biggest win till date. When asked about his plans with the incredible prize money, the winner responded, “I am going to invest part of it on my poker skills and rest to play more tournaments.”

After all, it was Bilzerian’s freeroll and grand is just his nickname! Like the life of the superstar, this zero-investment tourney concluded in a “Bigger, Better, Ballsier” way. Never before has any online poker platform ever hosted a mouth-watering 1 million GTD freeroll. This clearly means that not only would BLITZPOKER provide variety of games for professionals and recreational players, newbies will be given a welcome bonus which will definitely boost their confidence.

The winner is looking forward to his chance to party with Dan and his ‘angels’. Keep reading GutshotMagazine.com for more updates on BLITZ and other online poker stories from across the country.