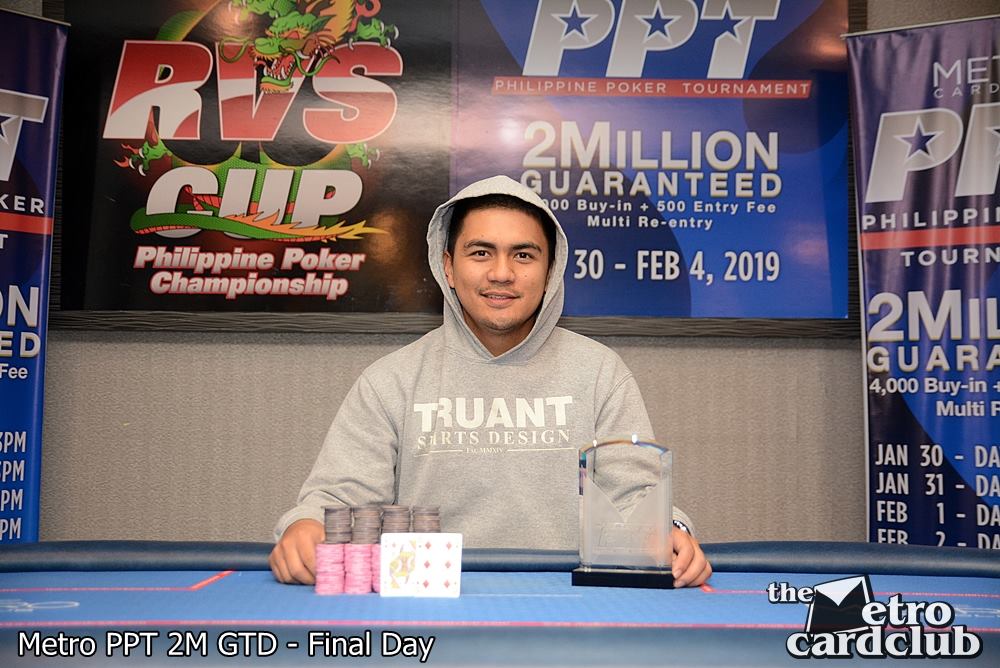 
With a major series at Manila in books recently, the Manila Millions held at Okada, another Filipino tournament series has reached its end. The Philippine Poker Tournament was hosted at the Metro Card Club in Manila, a famous poker destination in the city.

The Main Event of the series had a PHP 4.5k buy-in for the entry and drew a total of 487 entries over the course of 4 starting days. An overwhelming PHP 2 million was guaranteed in the event and saw lots of exciting poker action happening throughout its run.

Gideon Galpo topped the field and emerged victorious, claiming the prestigious Metro title and the first one for 2019. He also earned the 1st place cash prize of PHP 389k (~INR 5.26 Lakhs) after making a 3-way day with 2nd place finisher Jester Intia and 3rd place finisher Danvic Ruiz. Both earned PHP 230k and PHP 340k respectively from the deal.

The final day of this poker tournament saw Galpo play some excellent poker. He sent 3 players to the rail to reach the Final Table of 10 as the chip leader. He went wire-to-wire till heads-up was reached. Galpo knocked out two more players before the heads-up began with Jester Intia.

In the final duel, Galpo lost his chip lead after Intia, a Metro regular, doubled up. However, just a while later he reclaimed his lead and dealt the final blow to Intia as his 6th elimination of the day to claimed his title. Galpo has no prior recorded tournament statistics and this very well could be his first live cash. He has showcased some awesome poker and will be looking to use this welcome bankroll addition to play in the exciting range of tournaments in coming time.

Keep reading GutshotMagazine.com for more such tournament roundups and poker news from the Asia Pacific region as well as from around the world.