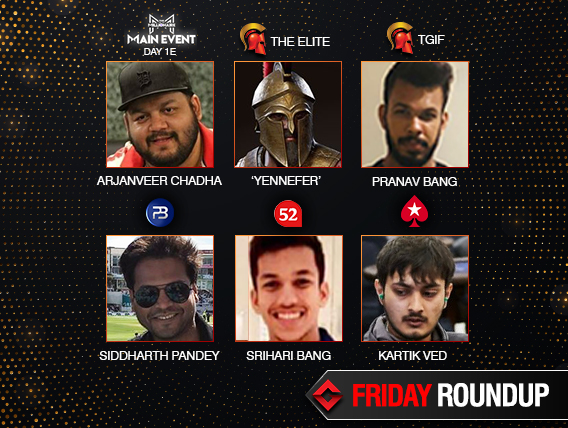 
Setting up the mood perfectly as the weekend is almost here. A plethora of big guarantee tournaments were played out last night on the virtual felts. Spartan Poker’s Millionaire Main Event wrapped up a fifth of its eight starting flights running parallel with Friday featured events, The Elite INR 30 Lakhs and TGIF. Also, wrapping up the third day of the PokerBaazi Monthly Value Series on PokerBaazi followed by the commencement of Adda52 Online Poker Series (AOPS) INR 5.2 Crore as the series guarantee. And here is a complete summary of Thursday majors…

A major attraction of the country’s biggest online poker series, IOPC is the ongoing The Millionaire Main Event INR 3 Crore GTD on Spartan Poker. The tournament kicked off at 6 pm, eventually garnering 380 players for a fixed buy-in of INR 11,000. After 4+ hours of intense grinding session, the field whittled down to 53 surviving players leading to Day 2. Out of which a well-known circuit grinder, Arjanveer Chadha aka ‘bazzingaa’ bagged the largest stack of 179,230. The chip in-charge is followed by the first millionaire on Spartan Manoj Pentakota aka ‘MRBLUE’ who was also the second chip leader on Day 1D amassing 174,243 chips and Rony Chowdhury aka ‘ChipTricks’ with 159,098 followed next, rounding up the top three players of the fifth starting flight.

At 9 pm last night, another bigger guarantee tournament on Spartan Poker was The Elite INR 30 Lakhs GTD attracting 410 players after each one paid INR 11,000 buy-in which drove the guarantee to become INR 41 Lakhs in the prize pool and the top 39 places benefited from the same. It was at 5:04 am that ‘Yennefer’ outlasted the field and beat ‘lionroar29’ in heads-up to bag the IOPC title.

The second featured tournament on Spartan Poker last night was TGIF INR 12 Lakhs GTD. The assured amount was smashed with the event enrolling a total of 902 players for a buy-in of INR 1,650. Topping this field was Pranav Bang aka ‘I’mThePlayboi’ capturing the IOPC title after the players struck a heads-up deal and eventually, ‘TimeTraveler’ settled in the runner-up position.

The Friday flagship on PokerBaazi was FRIYAY INR 6 Lakhs GTD, a part of the ongoing PMVS. Event 10 garnered a total of 208 players for a buy-in of INR 4,400 generating a prize pool of INR 6.42 Lakhs. Capturing the winner’s prize money of INR 1.50 Lakh was Siddharth Pandey aka ‘Siddonuts’ who railed out Sumit Sapra aka ‘boronyx’ in heads-up. Sapra managed to add INR 1.05 Lakh to his poker bankroll after finishing in the runner-up position.

INR 5.2 Crore is the series guarantee on Adda52’s Adda52 Online Poker Series (AOPS) running between 7 to 16 February. Yesterday at 6 pm, AOPS Whale INR 20 Lakhs GTD observed a pretty decent field after each one chipped in INR 7,500 buy-in. The assured amount was crushed to become INR 27.53 Lakhs which was well-distributed among the top 43 places. Conquering the field was a prominent face in the circuit, Srihari Bang aka ‘zombieballs’ who outlasted ‘cs56’ in heads-up to bag an impressive INR 5.25 Lakhs in prize money.

PokerStars’ headlining tournament Uppercut INR 10 Lakhs GTD registered a total of 260 players for INR 4,400. The top 47 finishers strolled out with a min-cash, a share from the final prize pool. After the dust had settled it was a well-known circuit grinder Kartik Ved aka ‘TheInternetKid’ who fired two bullets and earned INR 81,619 in prize money. Ved defeated Goonjan Mall aka ‘gmtesting.ind’ in heads-up who settled in the runner-up position.

Other notable players earning a min-cash include Nadeem Basha aka ‘Downtownplaya’ (3rd), Arsh Grover aka ‘BiggggTymeR’ (13th), Arjanveer Chadha aka ‘ballistik310’ (15th), Srihari Bang aka ‘bangbang1999’ (20th), Faiz Alam aka ‘LFGgggg’ (41st), Sagar Choudhury aka ‘sagarpupull’ (46th) and so on.

For more updates on the live and online poker tournaments in India and around the world, stay tuned to GutshotMagazine.com.

Sign-up to PokerSaint with code “GUT100”. Also, check out our online poker rooms section, where you can read reviews on the biggest and best poker rooms in the country, while also taking advantage of their bonuses and promotions. Check out these top poker rooms HERE.