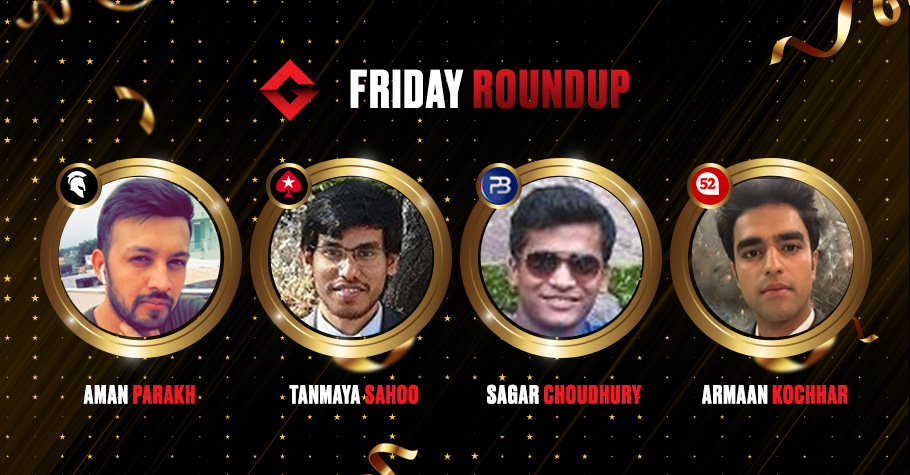 
When Spartan Poker conducts the Futuristic and Elite tournaments, you know it is a Friday. There were several high guarantee tournaments yesterday and pro players, as well as newbies, tried their hand at almost every game. The Summer Series on PokerStars was a welcoming bonus for all the grinders.

Gokul Raj was defeated by two anonymous players, Armaan Kochhar and Tanmaya Sahoo made headlines yet again. Other than this there was much more action and drama that went down yesterday. Let’s do a quick recap to know more.

The Futuristic tournament on Spartan Poker had 405 entries in total and the top 103 players were paid a min-cash of ₹2,700. This ₹880 buy-in tournament was shipped by Aman Parakh aka ‘KarmaPoker’ who took home ₹1,89,400 in prize money. Parakh was followed by Saransh Garg aka ‘iammrmeeseeks’ who received a pay cheque of ₹1,15,000.

This Elite tournament on Spartan Poker was shipped by a mystery player ‘Majestic’ who took home ₹7,40,250. The runner-up of this tournament was yet another mystery player Abhishek Pandey aka ‘abhi23451’ who received a pay cheque of ₹4,98,400. The positions of the winner and runner-up for these two players is surely a deal because they defeated poker pro Gokul Raj aka ‘Super Kings’ as he claimed the second runner-up’s spot.

In the past, this elite tournament was shipped by several pros like Siddharth Singhvi, Ujjwal Narwal, Rubin Labroo.

The Weekly Highroller on PokerBaazi was shipped by Sagar Choudhury aka ‘sagarpupul’ who cashed ₹4,48,000 in prize money. The runner up in this tourney was a mystery player ‘jaideepmanocha’ and won ₹3,14,000 in prize money. The victory for Choudhury must’ve been a tough one as pro players like WSOP bracelet winner Abhinav Iyer, and several others participated in this tourney.

This was a star studded event as several pro players like Mithun Mahesh aka ‘thepokeraja’ (3rd position, ₹2,02,000), Kunal Patni aka ‘VasooliChacha’ (4th position, ₹1,49,000), Manish Lakhotia (5th position, ₹1,12,000), Vivek Dube aka ‘Vivek25’ (8th position, ₹59,760), Sanket Arora aka ‘blackcod’ (12th position, ₹32,580), among others. Saurabh Ramola aka ‘twister’ was the bubble boy in this tournament as he busted in the 22nd position. Gutshot also did an exclusive interview with him in the April edition of the e-magazine.

While those players made it in the money, several other pros like Naresh Veeravalli aka ‘Emperor457’ , Myron Pereira aka ‘priyankAAchoprAA’, Gokul Raj aka ‘Nygma’, Abhinav Iyer aka ‘griezmann’, Sanat Mehrotra aka ‘mehro2511’, Arsh Grover aka ‘Button_Hai_Bro’, Shashank Desai aka ‘indianrat’ were not able to get min-cash too.

The Deltin Online Poker Tournament (DOPT) Pot Limit Omaha tournament on Adda52 was shipped by Armaan Kochhar aka ‘Tandavam’ who made ₹4,71,671 in prize money. The runner-up of this ₹7,500 buy-in tournament was an anonymous player ‘YOGYA3011’ who cashed ₹2,811,89.

The tournament had 266 entries in total and the top 27 players were paid a min-cash of ₹16,327. The advertised guarantee was ₹17 Lakh but it was surpassed and a bigger prize pool of ₹18,141,21 was formed. Gadadhar Behera aka ‘gd1921’ busted at the 4th spot (₹1,54,200), and he was followed by lawyer turned poker pro Ashish Ahuja aka ‘rocky3705’ who cashed ₹1,04,312. They were followed by Guruprasad Gupta who busted at 6th spot and managed to make ₹77,100 and he was followed by Aman Parakh who won ₹45,353. Parakh had already shipped the Futuristic tournament on Spartan Poker in the same night.

The Uppercut tournament in Summer Series was shipped by Tanmaya Sahoo aka ‘tks5432.’ He cashed ₹1,02,457 in prize money. Sahoo was followed by anonymous player ‘machheley’ who had a pay day of ₹1,02,456.

The Uppercut tournament on PokerStars was a ₹4,400 buy-in event. The total entries for this tourney were 311 and the top 35 players were paid a min-cash of ₹5,206. The advertised guarantee of this tournament was ₹12,00,000 but it was surpassed by a slim margin and the final prize pool stood at ₹12,44,000.