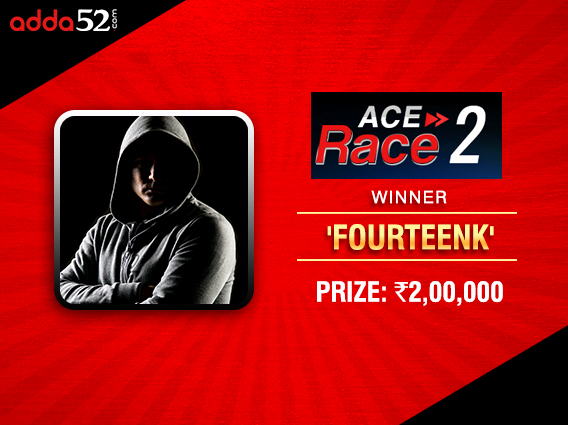 
The Ace Race Leaderboard is a month-long promotion on Adda52 which guarantees a total of INR 15 lakh. But it comes with a twist as the Ace Race is divided in three phases of ten days each with the guarantee splitting into 3 way too. So, every ten days INR 5 lakh is up for grabs for players. Players with maximum points at the end of every ten-day period takes home the top prize of INR 2 lakh. Points are awarded by performing well in Adda52’s featured tournaments during the month. These featured tournaments include The Roar, Judwaa, Godfather, Whale, Hitman, Adda52 Millions, Sunday Suits, Sunday AF tournaments and Beast.

Ace Race I for the month of September was won by Pradeep Singh aka ‘Megafish1’. He was not too far behind in the second phase as well, finishing third in the Ace Race II. ‘fourteenk’ shipped the Godfather 5.0 tournament last Thursday which gave him the required boost to top the Leaderboard and win the top prize of INR 2 lakh.

The Godfather 5.0 offers a guarantee of INR 20 lakh and a ticket to the Aussie SnG Finale. He bested a field of 419 entries to take home the first prize of INR 5.42 lakh, which was his best online score but not his first notable score. He has already final-tabled in The Whale – 6 Max and Judwaa tourneys, while finishing in the money (ITM) in Godfather, Sunday Suits and several other crucial online poker tournaments.

Other notable players in this phase of Ace Race Leaderboard were Sahil Mahboobani aka ‘ImHighIShove’ who finished 5th and ‘bhola’ who finished 2nd. This ever-growing promotion by Adda52 is one of a kind as players do not have to wait an entire month but just ten days to get high rewards which is one main reason why the Ace Race Leaderboard attracts players and is becoming extremely popular.