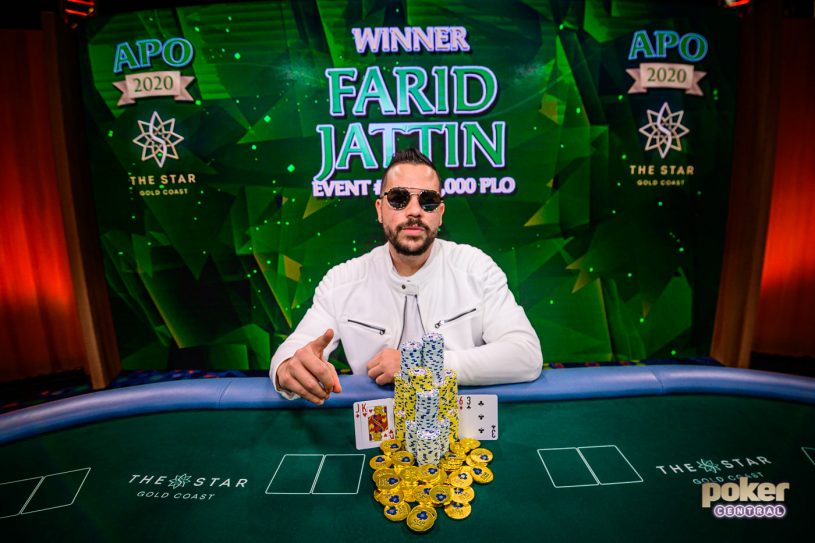 
The 2020 Australian Poker Open is carried by No-Limit Hold’em and Pot-Limit Omaha events entirely and is currently underway at Melbourne’s The Star Gold Coast casino floor. The series started on 25 January to run until 31 Jan putting forward a total of 7 tournaments. And yesterday, taking home the 4th event title $25,000 PLO was Colombia’s finest, Farid Jattin pocketing a massive A$290,000 in prize money!

The entire tournament pulled out a total of 29 runners that created a prize pool of $725,000 and the top five players made it into the money. Unfortunately, Sean Winter became the bubble boy of the tournament. Jattin entered the final table building a towering stack of 2 million, taking care of his business by knocking out all four of his opponents in under 90 minutes which turned out to be the quickest of the FTs.

It was Alex Foxen to depart in fifth place and ended up earning $58,000. By now the Hungarian player Andras Nemeth had taken the overall lead but couldn’t manage to last any longer, Nemeth was all-in with a pair of Aces and couldn’t take over Jattin’s flush on the turn and with a blank river, Nemeth followed Foxen in the fourth place. With the elimination of George Wolff in 3rd after his pair of tens failed to dominate Jattin’s pair of Kings, heads-up got underway.

Jattin accumulated a stack of 4 million was up against Finland’s Joni Jouhkimainen with 350k chips and it didn’t take too long before Jattin finished the day, finding his second pair on the river, paving way for Jouhkimainen to head towards the payout desk.

With over $5.39 million in total live earnings, Jattin is rank 1 in Colombia’s All-time money list with a back-to-back win after already taking down Event #12 in the 2020 Aussie Millions NLH 25k Challenge for $678k. “There’s a lot of luck in PLO,” said the champion, “but it felt like I played flawlessly and I’m happy with my performance. I want to represent Colombia properly and I feel like that’s always something I wanted, put the flag up in the sky is amazing to me.”