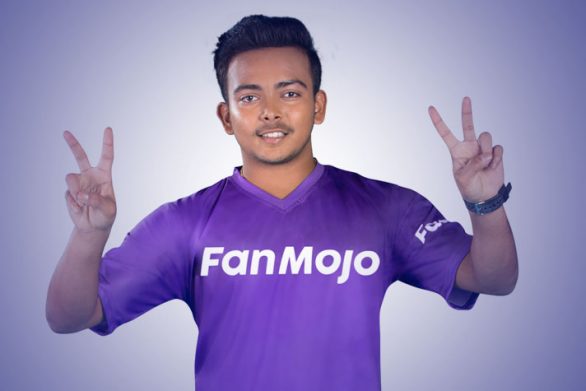 
FanMojo (www.fanmojo.in), one of the newer Indian fantasy sports websites operating in the country, has just signed young Indian cricket prodigy Prithvi Shaw as the company’s ambassador. Shaw is an excellent batsman and is also part of the current Indian cricket team. He is seen as an inspiration by many young sporting aspirants.

Shaw is a 19-year old batsman hailing from Thane, Maharashtra. He plays so well that has often been likened to the God of cricket Sachin Tendulkar. Tendulkar spoke of him in the past saying, “Around ten years ago, one of my friends asked me to take a look at the young Prithvi [Shaw]. He asked me to analyse his game and give him some advice. I had a session with him and gave couple of pointers on how to improve his game.” Tendulkar later said to his friend, “Are you watching? That’s a future India player.”

With this association with Shaw, FanMojo is now hoping to strengthen its presence in the burgeoning Indian fantasy sports market. The company has entered the scene relatively recently and will face plenty of competition since a lot of budding companies have entered the market in these months. Some of them include Fan Super League, HalaPlay, MyTeam11, My11Circle, and others.

Sumesh Menon, co-founder and Group CEO of U2opia Global, parent company of FanMojo, said, “We are proud to collaborate with the very talented Prithvi Shaw, who shares in our common belief system – Kaabil Jo, Khiladi Wo. More importantly, our fans are his fans. We are rooting for his success.”

Shaw also commented on this development saying, “I am happy to be a part of FanMojo which is one of the fastest growing fantasy sports platforms. I decided to associate with FanMojo as we have synergies in terms of the values and ideology that I follow in life. I am sure that FanMojo with its innovation in the space of fantasy sports will take it the next level.”

In 2018, under Shaw’s captaincy, India U-19 beat Team Australia in the World Cup Final by 8 wickets. This was the fourth World Cup win for our young Indian team. Keep reading GutshotMagazine.com for more such sports news as well as other gaming/gambling related news updates from across the planet.