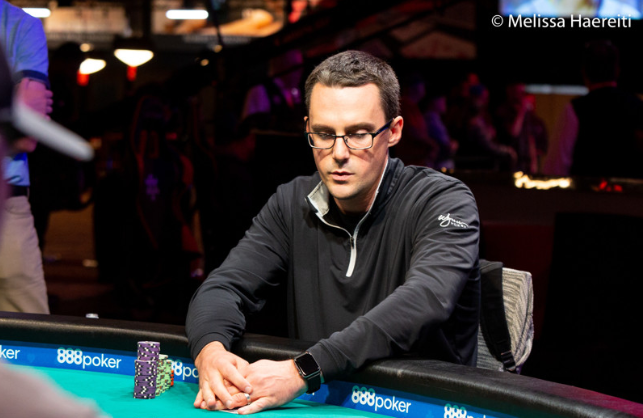 
Event #37: $1,500 NLHE saw 20 survivors bagging up yesterday and coming out to play Day 3 earlier today. We thought we would have a winner today, but instead we are down to the final two who will have to come out early tomorrow to decide a winner among them.

Ian Steinman is one of those players, an American with over $400k in live poker winnings, but no WSOP bracelet to his name yet. His best win of $201,428 came a couple of months back for finishing second at the WPT Rolling Thunder. Not many will forget that incredible fold he made, having a set of Kings. He held the chip lead early on and was likely to be crowned winner today, but his opponent made a stunning comeback and is now in the lead.

That opponent is Eric Baldwin, a player with live poker experience of over a decade and a single WSOP bracelet as well, coming way back in 2009, when he shipped the same event for $521,991. A win in this event will take his live poker tournaments winnings past the $6 million mark.

Baldwin now holds a 4:1 chip lead over Steinman and is favourite to go on to win that second bracelet and the $319,580 reserved for first place. It will still be a big cash prize of $197,461 if Steinman comes second, but he won’t give up easily and will have his eyes on his first WSOP bracelet as well.

How long do you think heads-up play will last when they return to play the unscheduled Day 4 of this tournament tomorrow? Do you think it will be a tough battle? Or will we see Baldwin wrapping it up soon? Leave your comments and let us know. Also, keep reading GutshotMagazine.com for an update on who wins the tournament.