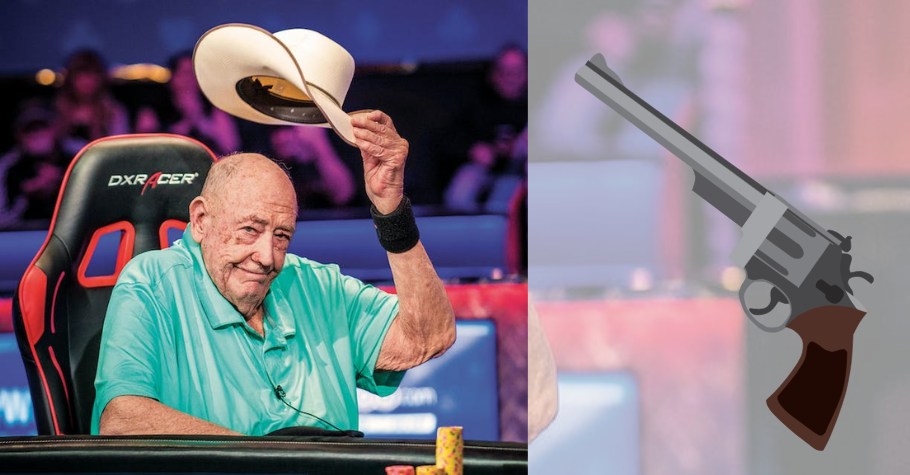 
The Godfather of poker—Doyle Brunson has finally spoken on the infamous Robbi Lew – Garret Adelstein scandal. And his reaction is hands down the most savage one till date. Brunson reacted to a post from a Twitter user.

A user called Yosh, who goes by the username ‘jamesStHilaire’ tweeted on his account saying he bets that Brunson would be enjoying the ongoing Robbi – Garrent cheating scandal and its aftermath on Twitter. Yosh further added that he wonders how people would handle disputes like this one back in the day when Twitter did not exist.

I bet @TexDolly is enjoying this whole @RobbiJadeLew drama. How did you handle disputes like this back in the day without twitter?

To this, Brunson replied saying, “With a 38 special.” Well, now that was a ‘holy shit’ moment for sure. It was just one of those moments where ‘The Doyle Brunson’ was simply being his brilliant self.

The ‘38 Special’ which is also commonly known as .38 S&W Special is a rimmed, centerfire cartridge designed by American firearm manufacturer Smith and Wesson. Brunson is known for his badass gangster image in the poker world, and his reply in this context simply reminded everyone that he is a true badass.

Naturally, the tweet attracted a lot of reactions from several users including pros. Poker player and YouTuber Joey Ingram shared his thoughts saying if it was 1973, and Brunson would shoot someone, the poker world would celebrate. He further added that in 2022 Adelstein (GMan) makes a tweet with a couple staged photos in an article by Los Angeles Times and people are triggered.

1973: Doyle shoots someone and the poker world celebrates

2022: GMAN makes a tweet w/ a couple staged photos in a LA times article and the people are triggered

To this, poker pro Daniel Negreanu replied saying “Imagine GMan telling Tony Spilatro he thinks he is cheating. He’d be at the bottom of Lake Mead even though in this case, it would likely be true.”

Imagine GMan telling Tony Spilatro he thinks he is cheating.

He’d be at the bottom of Lake Mead even though in this case, it would likely be true.

Well, we’re not the only ones who think that Brunson’s reply was the best one yet. The tweet was flooded with replies of the same opinion.