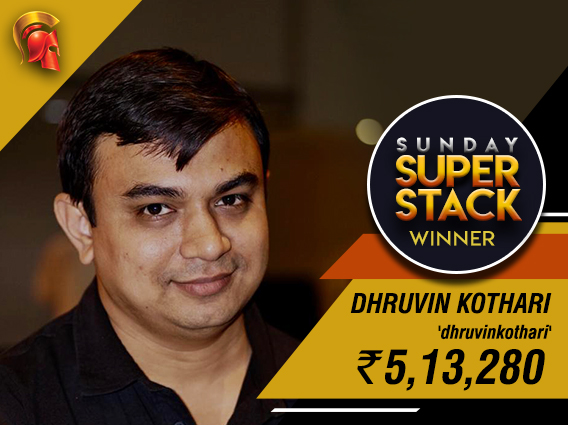 
Sunday SuperStack INR 25 Lakh GTD is the biggest featured tournament on Spartan Poker in terms of the guaranteed prize amount being given away every Sunday evening. Naturally, it attracts the toughest competitors from across India and yesterday was another SuperStack tournament, this grind lasting nearly 9 hours.

What began at 7:30pm last evening ended only at 4:24am this morning and the sleepless night would’ve been very fruitful for those who ran deep. In particular, it was a brilliant end to the week for a certain Dhruvin Kothari aka ‘dhruvinkothari’ who hasn’t made headlines on Spartan for the first time.

Primarily a cash games player, Kothari puts in a lot of volume and is often rewarded well for that, being one of only two recipients of a brand-new Mercedes from a promotion on Spartan Poker in October 2018. Last night however, he displayed his tournament prowess, outlasting the entire field to win this title and the massive first-place cash prize of INR 5,13,280.

As you may have guessed, the competition included several pros and regulars alike. The top 39 players were paid out with a min-cash of INR 17,664 and a couple of known players to get min-cashes were Rajat Mahajan and Mayank Jaggi, the former having also shipped the Adda52 Millions on the same night.

Gaurav Sood (26th), Neel Joshi (25th), Gokul Raj (20th), Sahil Agarwal (16th), Induprakash Mishra (15th), Faiz Alam (12th) and Rohit Mishra (9th) were also a part of the action. From them, Induprakash Mishra seems to be enjoying his poker recently, having taken down the TGIF tournament on Spartan Poker just a couple of nights back.

In heads-up too, Kothari was up against a tough opponent in ‘ONmyMAC’ and this guy has been on a brilliant run. Thursday last week, he won HeadHunter on Spartan and was also part of a 4-way deal in Friday night’s Elite tournament, shipped by Jay Pandya. Ironically, Pandya spoke about Kothari being his mentor and coach and here we are, 2 days later, talking about Kothari himself winning a major tournament.

Talking to Gutshot about last night’s victory, Kothari said, “It was nice playing Sunday SuperStack. I was playing a tournament on Spartan Poker after quite a few days and it was very nice to win it. I got lucky in the early part and enjoyed the lead more or less throughout the event. Heads-up was really fun as I earlier used to play NLH heads-up a lot in cash games. Overall, a satisfying experience.”

An Ace-high diamond flush is what it took to win the final hand and the huge cash prize. As for ONmyMAC, he had to settle for INR 3,41,248 for finishing second. For all updates on similar Spartan tournaments and other major poker offerings from around the world, keep following GutshotMagazine.com.