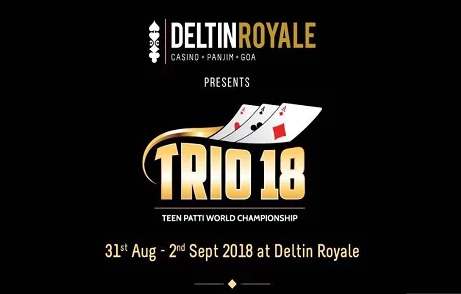 
While the Deltin Royale in Goa is more famous for high-stakes poker tournaments which are held once in every few months, there are many other card games played on board this luxurious casino, including the famous Indian game called Teen Patti. In a recent announcement, the second edition of the Trio 2018 Teen Patti World Championship is all set to be hosted again at the Deltin Royale.

This announcement was made by Delta Corp Ltd, India’s only listed gaming company, and the championship will be played at the Deltin Royale Casino between 31 August and 2 September 2018. The 3-day tournament is the first of its kind and it is set to attract different card game players from around the country.

“It is our endeavour to provide the best quality entertainment and food and beverage to our guests. In an attempt to ensure that players get a platform to play India’s most popular card game, Teen Patti, in an engaging and entertaining format, we have decided to host the second competitive edition of Indian flush, which will also see a ‘Trio’ of actresses visiting the casino and encouraging the players,” said Anil Malani, President (Operations) of Delta Corp Ltd., commenting on the concept of ‘Trio’.

Keep reading GutshotMagazine.com for an update on the Teen Patti World Championship and who ends up as the top winners in Goa.