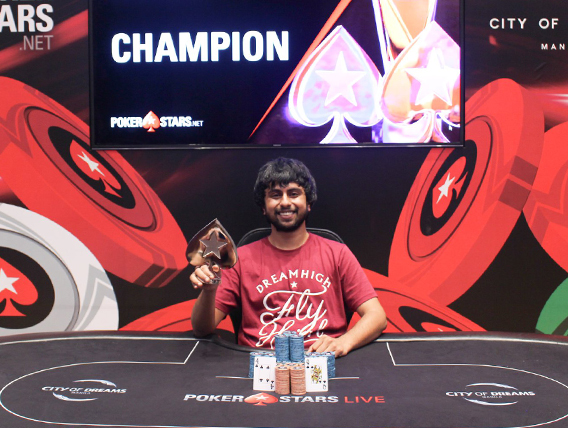 
As our readers are aware, we have been closely following the progress of the Asia Pacific Poker Tour (APPT) taking place in Manila, Philippines. A huge number of Indian players have made their way to play in this series and yesterday it was a matter of great pride for the Indian poker fraternity when Bangalore’s Chiraag Patel took down India’s first title in the series by winning the Php 15,000 NLH Turbo for Php 350,000 (~INR 4.54 Lakhs).

India came close to a title win when Akshay Nasa came in 2nd place in the APPT National event. This is Patel’s first ever international victory and the 3rd best money finish of his poker career. Patel was in fact already busy in the Main Event of which he made Day 2 but decided to get into Event 16 and what a good decision that was! 99 players ponied up the Php 15,000 to make up a a prizepool of Php 1,296,405.

Patel got off to a good start by building his stack to take him into the top five counts pretty early on in the tournament. He was in cruise mode for the most and even came to the final table as chipleader. One of the key hands giving him the lead, had Patel (5x 7x) defending his big blind to see a flop of Kx 3x 4x giving him a gutshot draw against his two opponents in the hand. The player from UTG fired out a bet again and was called by the player next to him. When action came to Patel, he made a substantial check-raise to drive both players out of the hand thus scooping up a big pot.

Heads-up battle had Patel facing off against China’s Yuanchao Li. While it’s never over in poker till the fat lady sings, the result almost seemed like a foregone conclusion given that Patel was playing solid and possessed a 10:1 chip lead going into headsup. The inevitable eventually happened when Patel moved in with Qx 4x and Li made the call Jx 9x.

A Queen on the river swung the game in his favour and with that, Chiraag Patel was crowned the winner in this APPT event. When asked about the experience, Patel said, “The best part of the entire tourney was team India railing me on the FT. Gave me a lot of energy!”

Congratulations to Chiraag for a fantastic performance and well deserved title and here’s a look at the Final Table Results (in PHP):-