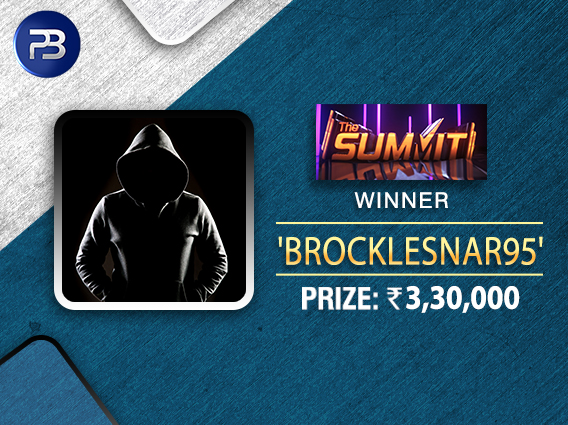 ‘brockLesnar95’ wins The Summit on PokerBaazi


PokerBaazi is one of India’s top poker companies and rightly so. They have daily featured tournaments where players can win massive prizes each day. One of these featured tournaments is The Summit MonsterStack Turbo INR 10 lakh GTD, which is contested every Thursday night at 8pm.

6 hours and 22 minutes is how long last night’s tournament lasted before a winner was crowned. This is one of their most popular tournaments and the guarantee is almost always crushed, last night being no different. 185 entries (102 players + 83 re-entries) registering meant that the INR 8,250 tournament had an increased prize pool of INR 13,87,500 last night.

This was eventually shared among the top 17 finishers. Coming out on top of the field and winning the biggest prize of the night on PokerBaazi was ‘brockLesnar95’, who walked away with the top prize of INR 3,30,000. He beat quite a few top pros to take down the tournament and will be very proud of this achievement.

Finishing in second place was Saumil Krishnani aka ‘indianavatar’, a known Indian player who plays online as well as live. He also made a deep run to finish second in the TIPS Turbo DeepStack Event at the Kings Casino in Rozvadov last month. Here, he took away INR 2,35,875 for finishing second. Gutshot had a word with Krishnani after this deep run. He said, “It was an awesome tournament and the Final Table was crazy. ‘brockLesnar95’ played really well. I’m happy to come at 2nd place.”

PokerBaazi holds featured tournaments throughout the week and we at GutshotMagazine.com will bring you updates on most of these major tournaments, so stay tuned.