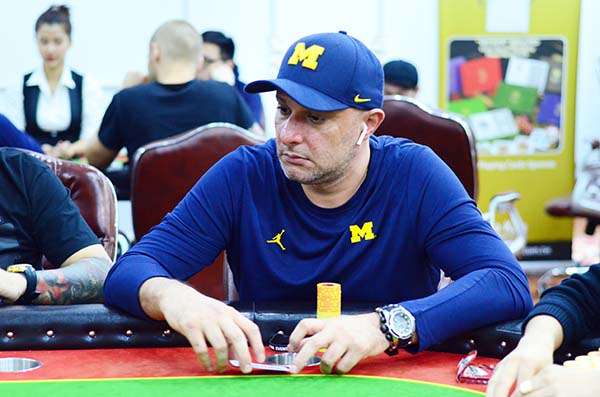 
The casino floor of the Pro Poker Club hosting the 2020 Asian Poker Tour (APT) Vietnam Kickoff Event is cramped with poker aficionados from beyond the Asian territory. After the Main Event, it was now time for Championships Event displaying VND 6 billion GTD.

The entire tournament observed 160 runners with each one paying VND 38,500,000 as fixed buy-in yet the event observed an overlay as the prize pool reached VND 5,820,000 which is to be well-distributed among the top 16 players along with a min-cash of VND 77,890. Day 3 began with the chip leader Michal Polchlopek (picture below) from the second flight who piled up the biggest stack of 800,000, in-charge of the 20 remaining players.

Cards and chips were in the air at 2 pm local time, at the time of commencement the Day 2 chip head Polchlopek gained a sizeable pot against the only Indian player left in the competition, Meherzad Munsaf and increased his stack to 967k. Gradually, Quan Nguyen was the first casualty in the tournament walking out empty-handed followed by Ng Cheuk Fan who couldn’t dominate  Polchlopek’s hand and the chip leader was the first to jump up to 1.15 million!

Eventually, after 4:29 pm local time, taking the fall was Nguyen Quang Ming who couldn’t survive David Erquiaga’s higher two pair, becoming the bubble boy of the Championships Event and resting in the 17th place. The money reached when Lok Ching Li came out with VND 77,890,000 in the 16th position.

It was now time for Munsaf (picture below) who was pushed away by Nguyen Thanh Binh soaring up to 950k. Erquiaga raised 25k and Munsaf jammed 88k and Nguyen four-bet to 200k and Erquiaga folded. Munsaf holding Qd Jd against Nguyen with Jh Jc and that’s when the Indian contender earned VND 93,470,000 (~INR 2.86 Lakhs), boosting his poker bankroll and settling in the 14th place. A few intense hours of eliminations gradually led to the formation of the final 8 after Hyunil Hong was out flipped by Xiao Yu Cheng to depart in the 9th place.

And once again it is Poland’s Michal Polchlopek building up a towering stack of 1,541,000. With total live earnings of over $673k, the chip leader championed the 2016 Merit Mediterranean Poker Cup. Polchlopek was also seen ending in the money at the APT Finale Taiwan for $5,071 and is now racing to grab his first-ever APT title!

The final 8 players will begin their ultimate journey tomorrow, 21st January 2020 at 1:30 pm local time to seize the ultimate VND 1,550,520 in prize money. Keep reading GutshotMagazine.com for timely APT Vietnam Kickoff updates, results as well as general poker news from around the world.