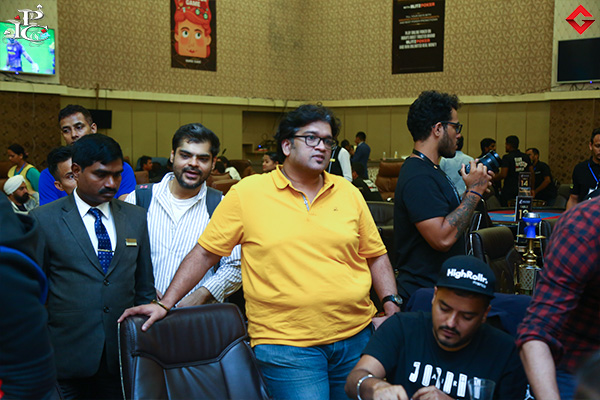 Anil Kumar busted on the 30th position. With this Day 1 of the IPC 25K Kick-Off comes to an end. MPL Pro Dhaval Mudgal and Spartan Poker Pro Nikita Luther made it in the money. Along with them, 27 other grinders made it to Day 2 of the Kick-Off event.

Coming to the hand, Siddhanth Kripalani bet 25,000 preflop with cards Q ♣ 7 ♦ which was called by Kumar. The flop showed 7 ❤ 6 ♠ A ❤ and Kripalani hit a pair and bet another 29,000 to which Kumar called as he had flopped an ace-pair. The turn 7 ♣ came out and Kripalani’s hand improve as he hit trips on the board. He 3-bet 27,000 with confidence and Kumar repeated the call. When the river brought Q ♠, Kripalani went all-in and so did Kumar. When the cards flipped, while Kumar had a good starting pair A ♣ T ♣ he lost to Kripalani’s full house and became the dreaded bubble boy of the event.

This was also a close call for Siddarth Singhvi who just missed being a bubble boy for a second time as he had the second shortest stack in the tournament. Singhvi has bubbled the 8K Mega Satellite on Day 1 of IPC Megastacks May 2022 and would not have been pleased to become a bubble boy twice in a row.

Day 2 resumes at 1 PM tomorrow (19th May). The player who crushes this event will walk away with a massive prize money of ₹13,31,200. Stay tuned to Gutshot Magazine to know all the live updates of Day 2 IPC 25K Kick-Off event.

Our team spoke to Anil Kumar who busted on the bubble and here’s what he said, “I was disappointed as I wanted to win chips from the chip leader and ship the tournament.”