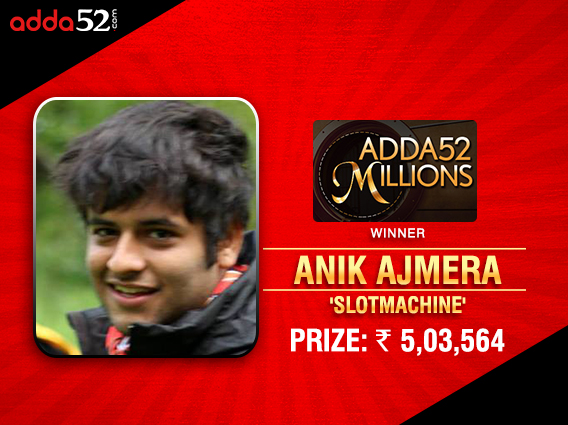 
When you talk about Indian poker tournaments that attract the toughest fields with the best pros from around the country, you have to think of the Adda52 Millions, a weekly tournament that is part of Adda52’s Sunday grind tournaments and that is contested each Sunday at 8pm.

Last night too, plenty of known pros were a part of the INR 11,000 buy-in tournament and that entry fee itself shows how competitive the tournament is. Yesterday’s grind at the virtual felts of Adda52 went on for nearly 8 hours as a winner finally emerged at 3:48am this morning, following a deal in heads-up.

The pay jumps are big in such high-value tournaments and no one would’ve wanted to miss out last night, which saw Anik Ajmera aka ‘slotmachine’ and his heads-up opponent ‘bhagwanbhakta’ striking a deal to secure themselves similar prizes based on their chip stacks. Ajmera was ahead so he won INR 5,03,564 for finishing first while bhagwanbhakta settled happily for second place and the runner-up prize of INR 4,76,436.

Yesterday, a total of 125 unique players registered to this Adda52 signature tournament and only 12 of them walked away with a return on their investment, winning a min-cash of INR 35,000. Another top player who made a deep run in the tournament was Sahil Mahboobani aka ‘ImHighIShove’ who finished in third place for a prize of INR 2,65,000.

Gutshot spoke to Ajmera after this victory and he said, “It feels good to finally take down the Adda52 Millions after final tabling the tournament a couple of times in the past. It has one of the best structures – deep and 6-max. It almost never becomes a shove fest; there’s a lot of room to play.”

“The Adda52 Millions field is generally harder than other tournaments since most of the regs play it. I ran pretty good from the start, had a top 10 stack nearly throughout, and managed to run pure in crucial spots. Towards the end, ‘darkfish15’ was one of my toughest competitors,” he added.

Keep reading GutshotMagazine.com for more updates on the major Adda52 tournaments through the week, and also for updates on other poker stories from around the world.