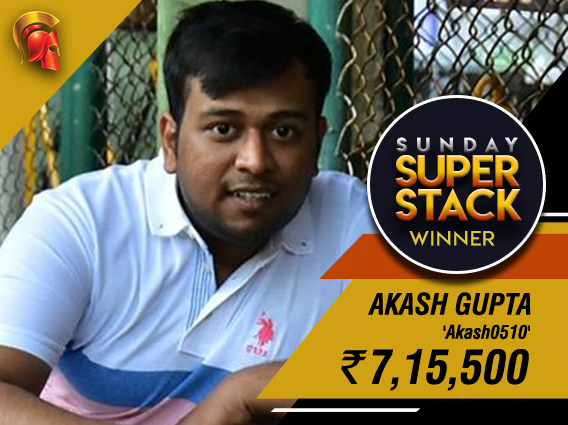 Akash Gupta aka ‘Akash0510’ finished on top of the field and bagged the title. He took home INR 7,15,500 as the first-place cash prize. He beat Pranjal Gandhi aka ‘lilmessipranjal’ in heads-up who settled for INR 4,45,500.

The final hand of the match began with Gupta holding an overwhelming chip lead of almost 3:1. It was just a matter of time, and that too not much, for him to bag the title. He proceeded to shove pre-flop with pocket Fives. Gandhi called with Queens. The board revealed 9s 9d 5s Ah Ts and gave a full house to Gupta, beating Gandhi’s Queens and Nines.

Gupta is a regular online grinder in the community and has seen major title wins previously. Gupta, just in this year, won the January IOPC’s DareDevil for a pay-check of INR 3.66 Lakhs. He bagged a PokerBaazi PPL title last December for a much greater amount. He is an up and coming player and will look to continue this winning trend in coming months.

Others include Sriharsha Doddapaneni aka ‘GTOsucks’ (27th – INR 18,900), Anurag Srivastava aka ‘InvestmentBanker’ (28th), Ashit Sharma aka ‘Loki19’ (30th) and Siddarth Singhvi aka ‘PeterPunter’ (34th). Keep reading GutshotMagazine.com for more such tournament updates, round-ups and for general poker news from around the world.