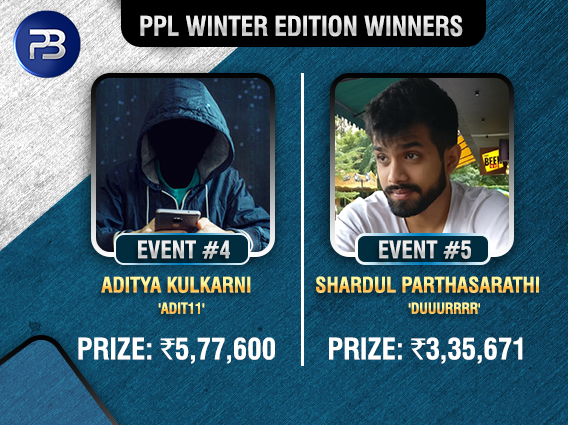 
The much-awaited PokerBaazi Premier League (PPL) Winter Edition kicked off yesterday on PokerBaazi and players from all over the country have been waiting for this edition, which is scheduled to be the last of the year, but it is also their biggest ever series yet, with INR 5+ crore on offer between 10-16 December 2018.

Yesterday was the first day of this edition and five tournaments were scheduled for the day, with a couple of high-value tournaments mixed with a few smaller side events for the mid-stakes players. The biggest winners of the day turned out to be Aditya Kulkarni aka ‘adit11’ and Shardul Parthasarathi aka ‘duuurrrr’.

Take a look at a roundup of PPL Day 1:

With a buy-in of INR 1,100, the opening event saw a resounding response with a total of 616 entries (including 320 re-entries) that drove the prize pool all the way up to INR 6.16 lakh, continuing the trend from last PPL, where the guarantees were almost always broken. Eventually, 47 players finished in the money but the biggest winner from them was Anish Suri aka ‘THENUTS’ who shipped the tournament for INR 1,17,040, beating ‘anzzzzz’ in heads-up, who won INR 86,230 for finishing second.

The second tournament had a slightly lower guarantee with the same buy-in of INR 1,100. Eventually, 246 entries registered and from them, the top 39 players were paid out from the prize pool that was taken up to INR 2.46 lakh. ‘Ashutosh.anand7’ emerged victorious here, taking home the top prize of INR 47,355. In heads-up, the player beat ‘manmeet07’ who won INR 35,055 for finishing second.

DeepStack Turbo was the next tournament format on PPL Day 1, with INR 5,00,000 on offer with a buy-in of INR 1,650. Once again, 520 entries meant that the prize pool was pushed all the way up to INR 7.8 lakh, giving participants more money to win from. Kavish Kukreja aka ‘narcos’ was victorious in this tournament, adding INR 1,48,200 to his poker bankroll and continuing what has been a very good run in online poker of late. Here, he beat ‘interalia_1’ who also cashed out a 6-figure score of INR 1,09,200 for finishing second. For those who don’t know, Kukreja also recently won the Adda52 Millions, the Godfather and the Ace Race 3 Leaderboard of November.

Aditya Kulkarni aka ‘adit11’ emerged victorious from this field and took home a hefty pay-check of INR 5,77,600 for shipping the tournament, after beating another known player Rohit Mishra aka ‘rohit22rm’ in heads-up, who won INR 4,25,600 for coming second. Other known players to finish in the money were Varun Gupta aka ‘VnutsG’ (3rd), Mayank Jaggi aka ‘alwaystiltAA’ (5th), Event #1 winner Anish Suri aka ‘THENUTS’ (8th) and others, as 47 players from this field were paid out (min-cash INR 15,200).

The final tournament of the night kicked off at 9:30pm last night, with a total of 465 entries joining the competition, each paying the entry fee of INR 4,125. The player who ended victorious was Shardul Parthasarathi aka ‘duuurrrr’ who has been winning quite often now on PokerBaazi, with a couple of big wins under his belt in the last one month or so. Just on 7th November, he shipped The Vegas and then followed it up by winning The Summit at the end of the month.

Last night, he won another major tournament and it looks like he really enjoys playing on PokerBaazi. Yesterday, he outlasted the entire field to pocket the first-place prize of INR 3,35,671 after he beat ‘spacecadet’ in heads-up, who also won a decent runner-up prize of INR 2,48,484. Other known players who made deep runs and finished among the 39 who were paid out were Apratim Sharma (3rd), Anirban Das (5th), Varun Gupta (6th) and Ashish Ahuja (10th).