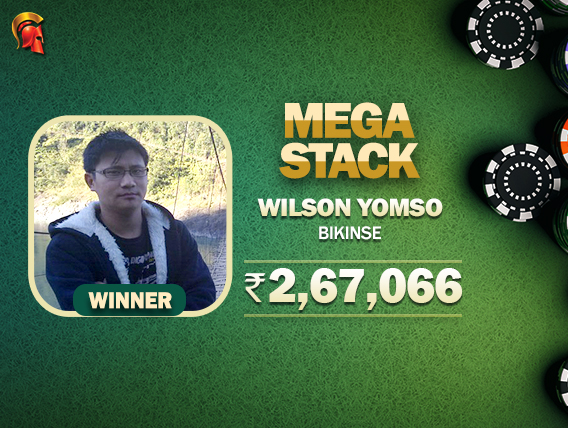 Wilson Yomso back with a Mega Stack win on Spartan


The Spartan Poker hosts some of the best daily featured online poker tournaments in the country, and one of those is the Mega Stack tournament which takes place every Tuesday at 7:30pm IST. The INR 10 lakh GTD prize pool attracts the top poker pros from around India, and yesterday was no different.

444 entries registered to this popular tournament and the guarantee was crushed, with a new prize pool of INR 13.32 lakh being generated. The top 39 players were paid out a minimum cash prize of INR 9,190. Yesterday’s tournament once again proved how poker is a game of skill rather than one of luck, with many regulars finishing in the money.

It was Level #57 when the tournament came to an end, after 6 hours and 12 minutes of grinding. Wilkin Yomso aka ‘Bikinse’ is one player who has been a part of several final tables on Spartan, and his heads-up opponent was Vinay B aka ‘Minimalist’, who has featured on an equal number of final tables, if not more.

It was a great battle between these two players, with Yomso’s last big win coming in a Destiny tournament towards the end of last year. Vinay B on the other hand, has been having a great run in recent months, with plenty of online titles to go with a spectacular 4th place finish in the Baby Dragon Event in Macau.

The blinds were running at 30,000/60,000 – 6,000 when the final hand took place, with Yomso holding a narrow chip lead of around 1.2:1 over Vinay. The latter raised all-in pre-flop with Jh Ah, and Yomso made the call with Qh Ac. The board opened 9h Qc Kc 6s 2c and a pair of Queens on the flop turned out to be good enough for Yomso to take down the pot and the Mega Stack title.

Yomso took home a pretty fat pay-check of INR 2,67,066, while Vinay B also added a decent amount of INR 1,77,555 to his poker bankroll. Other regular players to make it in the money were ‘pokerbill’, who finished 3rd for over a lakh rupees and ‘STIR FRY’, who finished 10th after winning the Mega Freeze title just a couple of days back.

Keep reading GutshotMagazine.com for similar results of the biggest online and live poker tournaments in India and around the world. Also, those who want to play on Spartan, watch out for tonight’s INR 20 lakh GTD Destiny tournament at 7:30pm IST.