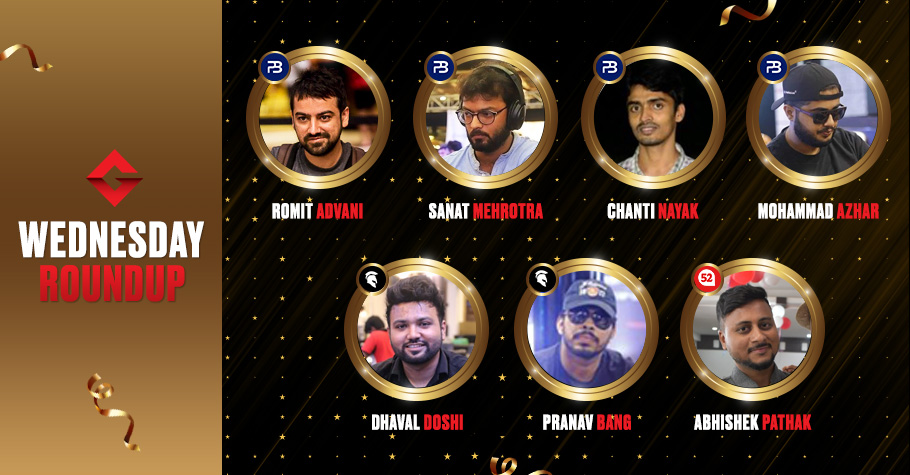 Wednesday Round Up: Bang, Azhar, Mehrotra Among Others Had A Blockbuster Night


The National Poker Series (NPS) on PokerBaazi has been quite eventful so far. The online poker platform has given all the poker pros and newbies a chance to compete and win big everyday. Other than this series, tournaments like Wednesday Vibes, Destiny and Maverick kept poker players on their toes. Most of the pros from the poker circuit battled it out at these tournaments.

Let’s take a look at who flipped, folded and tasted victory last night.

The Destiny tournament on Spartan Poker had 552 entries in total and the top 50 players were paid a min-cash of ₹13,800. This ₹5,500 buy-in tournament was shipped by Pranav Bang aka ‘I’mThePlayboi’ who received a pay cheque of ₹6,31,784. The runner-up in this tournament was Yash Chitre aka ‘Babyshark10’ who cashed ₹5,27,415.

Siddhanth Kripalani with 7 bullets, Yohan Patel with 5 bullets, WSOP bracelet winner Nikita Luther with 2 bullets made multiple entries but fell short and could not even make it in the money. The advertised guarantee of ₹26 Lakh was surpassed and a slightly bigger prize pool of ₹27,60,000 was formed.

The Wednesday Vibes tournament on Spartan Poker tournament had 587 entries in total and Dhaval Doshi aka ‘Ace of hearts’ nailed the tourney and took a pay cheque of ₹1,06,071. The runner-up was Deepak Ralliaram aka ‘FireDart’ who made ₹80,123 after firing two bullets.

The advertised guarantee of this tourney was ₹8 Lakh but it was surpassed by a slim margin and the final prize pool stood at ₹8,80,500. Though Doshi shipped the tourney, Pranav Bang, winner of Destiny tournament on Spartan Poker also tried his hand at this event with two bullets and later busted at 15th position for ₹11,710.

The top 47 players in this ₹1,650 buy-in tournament were paid a min-cash of ₹5,018. The bubble boy in this tournament was Sanish Chhabra aka ‘Sanish21’ who busted at 48th spot.

Kunal Patni aka ‘FloatToMyBoat’ whom we also consider the ideal travel partner was the 72nd player, the last person to receive min-cash of ₹3000.

National Poker Series on PokerBaazi is a golden opportunity for the players to win big. The Double Jump tourney had an advertised guarantee of ₹25 Lakh but it was crushed and a massive prize pool of ₹41,10,000 was formed.

The NPS PKO tournament had an advertised guarantee of ₹5 Lakh but it was crushed by a big margin. The final prize pool of this tournament on PokerBaazi stood at ₹11,18,000. Competing against 745 entries was poker champion Sanat Mehrotra aka ‘mehro2511′ who shipped three tournaments on the same day at the IOPC January 2021 edition.

Mohammad Azhar aka ‘chandlerbing’ shipped the NPS Kick-off tournament on PokerBaazi. Azhar is probably on a winning spree. The advertised guarantee of this tournament was ₹50 Lakh but it was surpassed by a slim margin. The final prize pool stood at ₹59,53,000.

The Sprint tournament on PokerBaazi was shipped by a mystery player ‘akshai’ who clinched the top spot and received a pay cheque of ₹2,59,000. The first runner-up in this ₹2,000 buy-in tourney was yet another anonymous player ‘Bharathugkris’ who cashed ₹1,82,000. Poker pro Anmol Mehta aka ‘anzzzzz’ who cashed ₹1,18,000 was the third runner-up. This tournament had an advertised guarantee of ₹6 Lakh but the final prize pool was more than double. NPS Sprint’s final prize pool stood at ₹15,26,000.