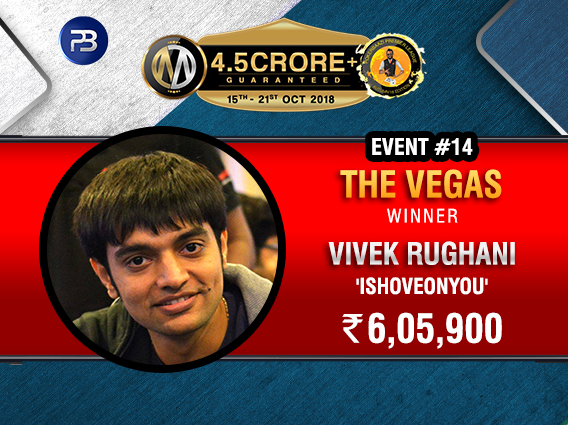 
The PokerBaazi Premier League (PPL) is a 7-day online poker series that has completed three days on PokerBaazi, with all 15 tournaments played so far turning out to be a massive success. The promised guarantees in all events have been passed so far, and players are thus excited for the few big tournaments that are still to be played.

We recently reported PPL Event #13 (PLO HighRoller) being shipped by Vinod Megalmani and there was another highlight tournament that began just an hour after that HighRoller. PPL Event #14 The Vegas INR 30 lakh GTD started at 8pm and this one too, attracted a very healthy participation.

In all, we had 664 entries (401 players + 263 re-entries) registering to the INR 5,500 tournament and eventually, the top 63 of them were paid out a minimum cash prize of INR 16,600. Yesterday however, the well-known Vivek Rughani who plays under ‘Ishoveonyou’ on PokerBaazi, had plans of settling for nothing less than the top prize.

With such big prizes at stake, the field was obviously filled with a lot of top players, but Rughani beat them all on the night, eventually hitting the final nail in the coffin at 3:06am, beating Aryan Chaudhary‎ aka ‘aryanstark’ in heads-up. Rughani received a fat pay-check of INR 6,05,900 while Chaudhary‎ also won a decent prize of INR 4,48,200 for finishing second.

The FT was full of PokerBaazi regulars, including Pranjal Gandhi aka ‘lilmessi’ (3rd – INR 3,23,700), Phanindra Akkina aka ‘phanindra’ (4th – INR 2,40,700), and Ankit Jajodia aka ‘akj290’ (5th – INR 1,74,300). Other known players to finish in the money include PokerBaazi Pro Abhishek Rathod, Mayank Jaggi, Pranav Bang, Shravan Chhabria, Pranav Khandalkar, Vinay B and others.

Gutshot caught up with Rughani to congratulate him on this big online victory. He said, “Thanks. It feels great to ship such an event. It was a marathon grind as there were a lot of entries due to the popularity of PPL and the new software which is really top notch. I had a decent stack throughout apart from last 2 tables when I became short at one point, only to make a comeback to become 2nd in chips at the FT. I cracked Rathod’s AA(nit) and then had to just apply ICM pressure as people were handcuffed due to the short stacks. Cheers”

This PPL title comes shortly after Rughani’s deep run at the APT Vietnam Main Event in Ho Chi Minh, where he finished 19th from 498 entries. He also had a message to the rest of his competitors at the PPL, saying, “Good luck to everyone for future events. Keep grinding and the results will come.”

Other results during the day saw Ankit Jajodia aka ‘akj290’, who finished 5th in The Vegas, winning the opening tournament of the day by beating 295 entries to get the top prize of INR 59,737. Nilahsmi Rahule aka ‘AndhaDhun’ won Event #12 for INR 1,12,368, and PokerBaazi Pro Abhishek Rathod won the final tournament (Event #15) for INR 47,829.

Keep reading GutshotMagazine.com for updates on similar major tournaments as well as daily updates on the PokerBaazi Premier League.