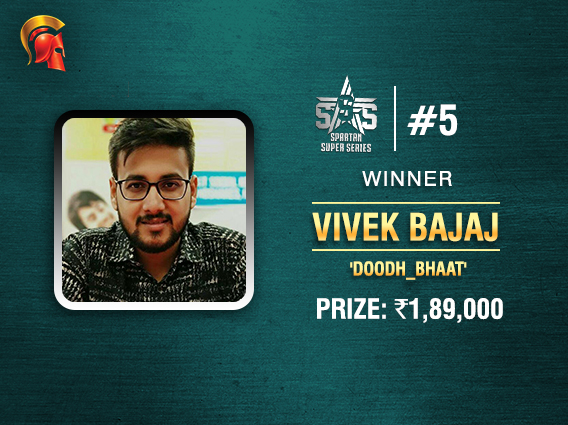 
Yesterday was an action-packed day on The Spartan Poker, with the September edition of the Spartan Super Series (SSS) kicking off, where INR 4+ crore is waiting to be won along with impressive leaderboard prizes. Five tournaments were scheduled for yesterday and it all came to an end with SSS Event #5 INR 5 Lakh GTD, an INR 2,750 re-entry tournament.

The night tournaments always see a healthy participation and this one saw a total of 360 entries registering which crushed the guarantee and the new prize pool of INR 9 lakh was shared among the top 30 players with a min-cash of 6,750. Topping the field and taking away the biggest chunk of this prize pool was Vivek Bajaj aka ‘doodh_bhaat’.

Here, he won the top prize of INR 1,89,000 after beating ‘peacelover17’ in heads-up. In what became the final hand of the tournament, both players were all-in pre-flop and after the community cards were revealed, Bajaj became the winner with a pair of Eight. peacelover17 settled for the runner-up prize of INR 1,32,300.

The 26-year old winner is about to become a Chartered Accountant, playing poker for 6-7 years now, having been introduced to the game by Zynga. He then shifted to real money poker a couple of years back and here he is today, claiming his biggest win till date and a prestigious SSS title. He has a day job as an accounts and finance manager and is a recreational player, playing only a few tournaments on Spartan, mostly the night ones and the Sunday ones.

Gutshot caught up with Bajaj after this win to ask him how he feels. He said, “I’ve been learning the game every day. Was on a downswing lately, and this win came at the perfect time. I am basically a single bullet player. Yesterday, I was once 100 out of 101. That’s when the fight back began. I play 90% of the time from mobile because it is where I am good. Throughout the game, I played very tight which helped me bluff my weak hands which eventually made everyone fold and helped me build my stack.” 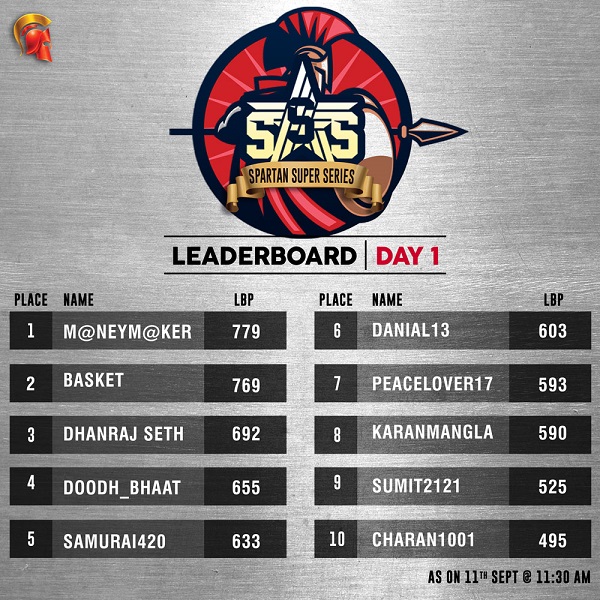 Keep reading GutshotMagazine.com for timely updates on all the 37 scheduled events at the Spartan Super Series.