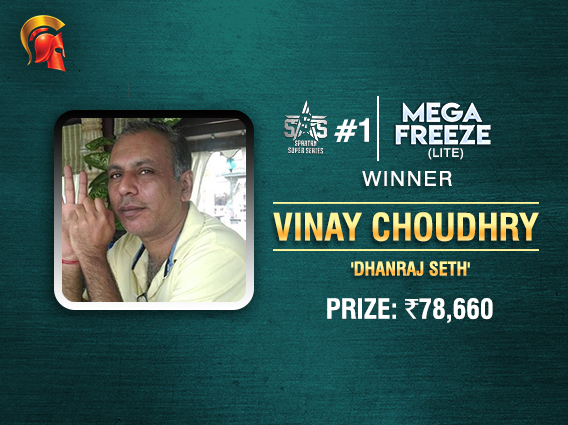 
As most of you poker enthusiasts in the country may already be knowing, the Spartan Super Series (SSS) kicked off on The Spartan Poker yesterday afternoon. The tournament series is one of India’s most prestigious online poker series, and this time, they have announced INR 4+ crore in guaranteed prizes, and INR 10 lakh to be won on the SSS Leaderboard.

The series began with SSS Event #1 Mega Freeze (Lite) INR 3 Lakh GTD, a freezeout tournament that started at 2pm. With a buy-in of INR 2,200, each player was only allowed one buy-in in this tournament. It saw a total field of 171 entries that broke the guarantee and created a new prize pool of INR 3.42 lakh.

The top 24 players could then be paid out a minimum cash prize of INR 3,420 and by the end of this tournament on The Spartan Poker, Vinay Choudhry aka ‘Dhanraj Seth’ ended victorious, taking home INR 78,660 in prize money. He outlasted the entire field and was handsomely rewarded for it, beating ‘karanmangla’ in heads-up.

The first tournament of this SSS series came to an end in Level #39, with the blinds running at 5,700/11,400 – 1,140 and Choudhry holding a 6:1 chip lead before the final hand. Here, the players posted their blinds and Choudhry went all-in pre-flop with 6h As.

karanmangla would’ve fancied his chances in the hand, making the call with Pocket Fives. However, Ah 3h 2d on the flop put Choudhry ahead immediately with a pair of Aces. Th opened on the turn and 9h opened on the flop which improved the player’s hand even further, giving him an A-high flush and the pot. karanmangla walked away with the runner-up prize of INR 52,839.

Gutshot caught up with Choudhry after this win, a 48-year old who is married with two kids, who grew up all over country as his father was in the Indian Air Force. He spent almost 10 years of his life in Canada, where he made his first trip to a casino in 2007, and that’s how his poker journey began. After live, he shifted to online and also won many tourneys online on Full Tilt Poker and PokerStars. He then came back to India in 2010 and was introduced to the Indian poker scene in 2016.

Talking about yesterday’s tournament, he said, “This event started on a low note for me, losing almost 70% of the stack in the first 30 minutes of the play. Coming back from that deficit and winning was extra sweet. Though there were many hands which made an impact, but one stands out tall which was played against a known pro. I played on his tendency to go for full stack and and made him commit a mistake and lose his 70 Bigs top 5 stack, deep in the tourney.”

Talking about his plans in poker, he said, “I love online poker, great value for small bankroll players like myself. Thankfully, Spartan conducts some series every month and keeps up the momentum. Otherwise there is a huge void in the daily tourney schedule. I started with live poker and love to play live, but in our country, there are only a handful of cities that offer live and I’m far away from them.”

On a parting note, he said, “This is my first major series event win. Was confident though about this SSS after coming second on LBS leaderboard and scoring good in the recently concluded LBS. I would like to give a shout out to my buddies Rajesh Shukla, Anant PS and Akshay Gupta for standing by me through thick and thin.”

Several SSS tournaments will be played each day and GutshotMagazine.com will bring you regular updates from this cash-rich series, so stay tuned.