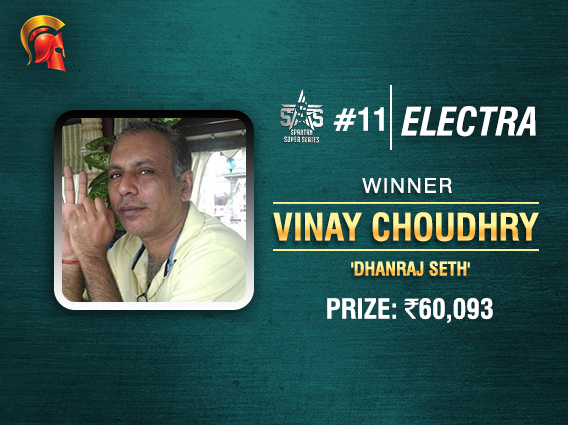 
When you’re on a roll, you are on a roll! That’s probably the tune, Vinay Choudhry is humming to himself after his win yesterday in the ongoing Spartan Super Series’ (SSS) Electra tournament. This was Choudhry’s second title of the series having claimed a win in SSS Day 1’s Mega Freeze (Lite) tournament as well. The SSS is a weeklong tournament series taking place at The Spartan Poker which promises participants over INR 4 crores in guaranteed prize money.

The Electra tournament, which was an evening tournament when first introduced at Spartan, now occupies the afternoon in the weekly tourney schedule of the site. Featuring a buy-in of INR 800 and a guaranteed prizepool of INR 2.5 Lakhs, yesterday’s Electra generated a prizepool of INR 2,86,160 courtesy the 229 entries which took part in the event. A minimum payday fo INR 2,146 was assured to the final 30 players who would end up in the money. But of course all eyes were focused on the top prizes at the final table. That final table featured a couple of familiar names in Arjanveer Chadha a.k.a ‘instrumental’ who has been enjoying quite the run of form and again a deep run for this player who finished in 6th place for INR 14,308. Finishing just above Chadha, was Rajat ‘GarammasaIa’ Sharma who took home INR 17,312 for 5th place.

The juice is of course in the top three spots and the first of the eliminations in 3-way was ‘IMUNAGI’ who was the short stack, meeting his end in this tourney at the hands Vinay Choudhry who plays as ‘Dhanraj Seth’ at Spartan. IMUNAGI completed his wheel draw on the river but unfortunately for him, his opponent had a higher straight on that river. That took us into heads-up with Dhanraj Seth holding a commanding 2 million plus lead over his opponent ‘Kingtut’s’ 717k stack. Heads-up battle lasted for less than 10 hands between these two. The last hand saw Kingtut (Ac 9s) moving all-in preflop and with a pocket pair, Dhanraj Seth: (3d 3s) quickly made the call. The flop 3c Ks 4c As 2d put paid to any hopes of a comeback as Vinay Choudhry takes down this first SSS title of Day 3 and a prize of INR 60,093. Kingtut got INR 42,065 for his second place finish.

More coverage from the SSS tournaments coming up so stay tuned to GutshotMagazine.com!