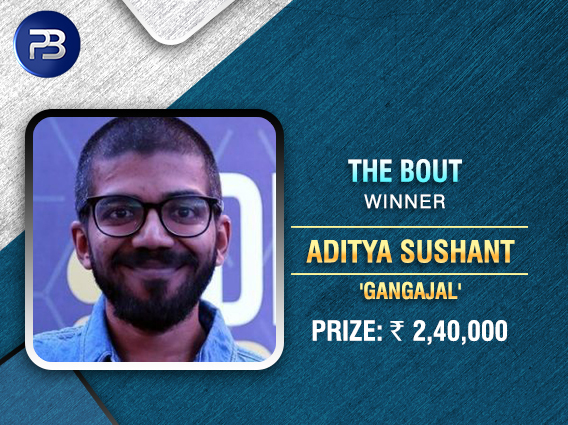 Today, The WPT India series kicks off at the Deltin Royale in Goa and players are extremely eager to be a part of proceedings at the series which will be played between 13-19 November. All those who won online poker tournaments in the last couple of days will move into the series with an added boost in confidence, like Zarvan Tumboli who won the BSS SuperStack on Sunday night.

Another major PokerBaazi tournament last night was The Bout INR 10 lakh GTD, a featured tournament which is played every Monday night at 8pm. Again, it would’ve been a good warm up to the WPT series and the player who ended up shipping the tournament was none other than Aditya Sushant.

More known for his victories on Adda52 and Spartan, this was a win on PokerBaazi after long for Sushant, India’s first WSOP gold bracelet winner. 206 entries joined the INR 4,400 buy-in tournament and by the end of the night, all these entries were knocked out and only Sushant was left, playing under the screen name ‘gangajal’.

Now he has won major tournaments in the past on PokerBaazi, including The Endeavour and the BSS SuperStack. Now, he added another PokerBaazi featured tournament to his list of online poker achievements, shipping The Bout for the first-place prize of INR 2,40,000.

The guarantee was missed slightly, and the top 17 places shared the prize pool with a min-cash of INR 20,000. Among the money finishers were Neeraj Kumar aka ‘SelfClaimedPro’ (13th), Sahil Mahboobani aka ‘ImHighIShove (11th) and Rubin Labroo aka ‘kornkid’ (9th). Pranav Bang aka ‘pranav.bang1’ also made a good run, finishing 4th for INR 90,000.

Now Sushant would be wanting to take this good form into the WPT series as well, where the prizes involved will be huge. Remember, Sushant is an automatic contender whenever India has live poker tournaments, having recently also won the Baadshah Live Tournament Main Event in Goa last month.