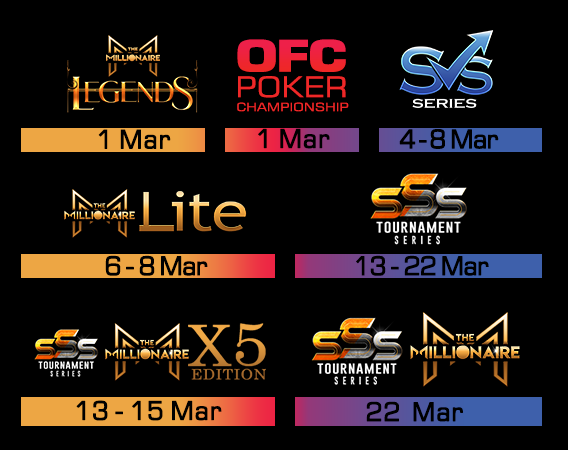 Triple features and much more in FTR’s march madness


Are you looking forward to making the best out of this festive season? Then March calls all the poker admirers out there to prep up and boost your bankrolls for the entire year ahead! FTRpoker is back with another twist. And here is a bag full of surprises, putting down a heavily packed poker tournament scheduled.

FTRpoker is placing before you an opportunity to become the March Millionaire only after you battle it out on Millionaire Legends INR 1.5 Crore GTD. This multi-flight tournament is just a few hours away to host Day 1A, 1B and Day 2 on 1 March for a buy-in of INR 27,000. Sit back and make the most of your comfy Sunday!

Are you seeking out to take down the Open Face Chinese Poker this month? Then why not join the tables in this one-day action that assures you a grand INR 5+ Lakhs GTD including INR 50k in the leader board with a buy-in as low as INR 110 ONLY! FTRpoker has designed 4 tournaments to take place on 1 March at different time slots. Well, that’s not it. You can also get a free entry to INR 2.50 Lakhs OFC Series Event #4 by pooling in INR 110 to the satellite event.

Popularly known as SVS, keeping in mind the low/mid stakes poker enthusiast in the country, this online platform is here with another thunder! Promising INR 66+ Lakhs in the March edition of SVS running between 4-8 March. Don’t worry, the buy-in starts from just INR 110, spreading before you 24 events. The action doesn’t stop there. No worries if you miss out on Millionaire Legends, The Millionaire Lite guaranteeing INR 10 Lakhs to first place is also on the schedule with three-starting flights. Let’s see who follows the steps of Rajat Sharma aka ‘Garammasala’ this March.

FTRpoker has an added flavour to end your month by placing two Millionaires in SSS. Scheduled to run between 13 to 22 March, the multi-flight Millionaire X5 will surprise the top 5 places with INR 10 Lakhs. Another Millionaire is planned to take place on 22 March. Why not bag both titles?

Only a couple of days back, the platform announced double features. But how does triple feature sound? Yes! You heard that quite right. FTRpoker is here with the triple feature so make sure you have plenty of time to boost your bankroll. Starting from 2 March only to satisfy your quench for poker thirst.

Undoubtedly, March is on fire! The hottest leaderboard that comprises of all online poker tournaments, including daily events, triple features, electric tournaments and so on. This leaderboard will have a massive 10 Lakhs GTD starting from 2 March and the top 10 players will be awarded as per their scores!

So, what is the wait for? Unquestionably, March is full of twists and turns, packed with a wide range of action. Register yourself on FTRpoker and become the next Millionaire, maybe? Don’t forget to stay tuned to GutshotMagazine.com to know the winners of the contest and for similar promotions from across the Indian poker industry.

Don’t have an account on FTRPoker? Check out their review page here, and don’t miss out on their bonuses, promotions, and guarantee-smashing tournaments. Sign-up now.