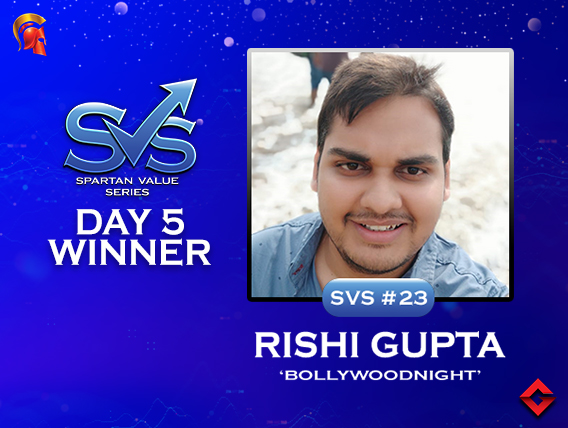 
Yesterday was the fifth and final day of the 5-day long Spartan Value Series (SVS) hosted by Spartan Poker. The series assures the low/mid-stakes players to pay a small amount as buy-in and work their way up to the big prizes. Once again, four tournaments were hosted and 4 winners emerged, each making a considerable bankroll addition. Keep reading for our complete summary on SVS Day 5…

The first tournament of the day had a low buy-in of only INR 165 and 315 entries registered to the event, with the top 23 eventually being paid out a minimum of INR 580 each. Coming out on top of the field was ‘thelastace’ who bagged the title and also added INR 10,121 for first place to his bankroll after the players struck a 3-way deal and with ‘thelastace’ carrying the largest stack was announced the official winner. Following the winner was ‘BurdenofProof’ in the second place and ‘gopiw1433’ in the second place.

The buy-in for the second tournament was doubled to INR 385 and here, 348 entries joined the field. Only the top 31 players finished in the money with a minimum cash prize of INR 1,100. The runner-up of Event #7, ‘Yashi9696’ ended as the champion after the players settled for a 4-way deal. And ‘Yashi9696’ having the biggest stack 727k of all added another title to his poker career.

It was online reg Rishi Gupta aka ‘BollywoodNight’ who came on top of the list. The buy-in amount increased to become INR 770 pulling out a total of 235 players. Eventually, the field whittled down and 23 players profited from the prize pool for a min-cash of INR 2,320. Gupta secured the first-place prize after the competitors settled for a 3-way deal, thus boosting his poker bankroll.

SVS Day 5 closed with the fourth tournament, Electric Big Daddy registering 360 players, all of whom entered for a buy-in of INR 1,650. Topping the day and claiming the last title was ‘Goldfish097’ who beat ‘risktakingmachine’ in heads-up. The concluding tournament saw the top 31 places in the money, receiving a min-cash of INR 5,280.

Making an end to the 5-day long SVS, the January edition’s Millionaire Lite also came to a standstill. Sunday saw Day 1C and the Main Event Day 2 of the same. Already growing with popularity, the third starting flight pulled out a massive number of 960 players for a buy-in of INR 1,650. It was ‘kaamchor’ to accumulate a towering stack of 3,44,504. Following the chip leader was ‘shovefish’ who bagged 1,78,209 Day 2.

Day 1C chip leader ‘kaamchor’ led the survivors of the three starting flights to Day 2 for the showdown. The star of the night was Dhinesh Kumar aka ‘kendralust’ giving a standout performance after outlasting a field of 2,255 entries. The tournament halted after Kumar railed out ‘GHOSTF@CE’ in heads-up to add another feather to his poker cap. To know more, read here.