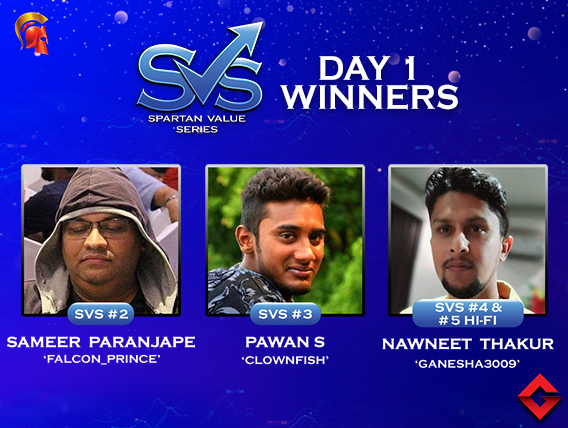 
Spartan Poker started the new decade with the January edition of Spartan Value Series (SVS). Especially put down keeping in mind the low/mid-stakes players who now have the opportunity to kick-start their poker career. Each month this leading online website queues major tournaments for the poker fanatics and this time the series comes with an incredible INR 48+ Lakhs GTD, for a buy-in as low as INR 110. Stretched between 8 to 12 January 2020, the player can watch out for The Millionaire Lite that assures 1 million to the first place! So, let’s have a quick look at the SVS Day 1…

The New Year’s edition of first SVS tournament enrolled 413 players for the lowest buy-in of INR 110 which saw the guarantee being surpassed to create a bigger prize pool of INR 41,300 which was shared among the top 27 places, each of these players strolled out with a min-cash of INR 413. However, the lion’s chunk of the same was taken away by ‘luck12’ who was announced as the official winner after a 3-way deal and with the anonymous player carrying the largest stack of 455k pushed away ‘SRI0606’ in the second position followed by ‘Kulsam1986’ in the third.

INR 220 was the buy-in to the second tournament which gathered 291 entries that eventually led to the creation of a higher prize pool of INR 58,200. The top 23 competitors profited from the same and taking away the largest chunk was online grinder Sameer Prakash Paranjape aka ‘Falcon_Prince’ after the players settled for a 3-way deal and with Paranjape accumulating the largest stack of 501k became the official titleholder. Following the winner was online reg Induprakash Mishra aka ‘supee’ in the second place and ‘ElvisGrinder’ in the third.

Both buy-ins and the assured amount decreased to become INR 165 and INR 35,000, respectively. The third tournament of the day lured a total number of 223 entries out of which only 20 players benefited from the prize pool who eventually strolled out with a min-cash of INR 469. Outlasting this field was Pawan S aka ‘Clownfish’ who defeated ‘mahi0718’ in heads-up for INR 8,400 in prize money.

In level 33 of the tournament, Pawan entered with a larger stack holding Ah Ks up against his opponent ‘mahi0718’ having Ad 8h. Both players shoved pre-flop and drew Jacks from the table, holding three of a kind. But the latter’s fifth card couldn’t dominate Pawan’s King kicker who ultimately shipped the entire tournament.

At 7 pm sharp, the second last event commenced with once again shooting up the buy-in to INR 880 and luring 255 players. However, 23 battled their way to secure the minimum cash of INR 2,366, a slice from prize pool of INR 2 Lakhs. Capturing the first-place prize money was Nawneet Thakur aka ‘ganesha3009’ who was announced the official titleholder after a heads-up deal, pushing away ‘Greyhound15’ to the runner-up position.

Each day Spartan Poker will host 5 SVS events and the final one comes with the largest guarantee. The fifth tournament attracted a huge field of 405 entries, each one of whom enrolled for a buy-in of INR 1,650. The advertised guarantee was also surpassed, generating a bigger prize pool of INR 6,07,500. Before the tournament came to an end, the top 45 places received a paycheck of min-cash INR 3,341. Fate was in favour of adding the second title to the winner of SVS Event #4, Nawneet Thakur aka ‘ganesha3009’ who railed out ‘Ak82’ to boost his poker bankroll with enormous prize money!

In level 39, Thakur held 3d Ah up against ‘Ak82’ having 8h 9s, pre-flop saw both players shove and eventually the board ran 9h Ad As 3h 2s and that’s when ‘Ak82’ two pairs of Aces and Nines couldn’t dominate Thakur’s who showed his full house, thus, triumphing the tournament and adding another feather to his poker cap. For the latest updates on live and online tournaments around the world keep reading GutshotMagazine.com and stay tuned!