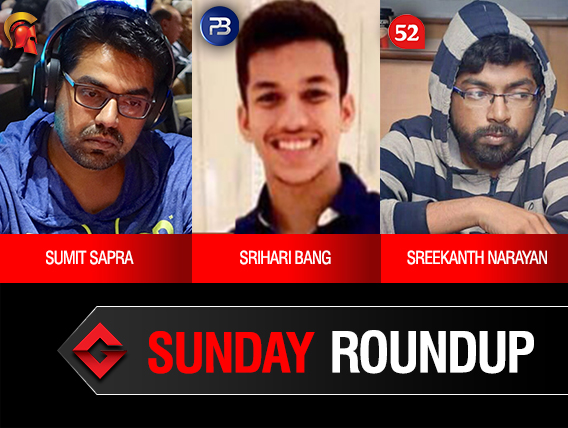 Enrolling a massive number of 663 entries with each paying a buy-in of INR 5,500 in the Spartan Poker’s Sunday SuperStack INR 30 Lakhs GTD. The tournament guarantee was crushed generating a bigger prize pool of INR 33.15 Lakhs, profited by the top 63 players. Over 9 hours of intense grinding saw the last man, Sumit Sapra aka ‘Sands Myth’, representing India in the APT Vietnam Kickoff Event, capturing the winner’s prize money after railing out the 2020 IPC 10k KickOff winner Vinod Megalmani aka ‘TheMuffinMan’ in heads-up.

Dominating a field of 189 entries in PokerBaazi’s The Monster INR 5 Lakhs GTD was none other than a leading figure in the industry, Srihari Bang. The tournament began at 5 pm and Bang playing under the username bangbang999’ seized the winner’s title after eliminating Viren Kapur aka ‘Bigbluffaces’ in heads-up for INR 1.2 Lakh. The runner-up managed to walk out with INR 84,650.

PokerBaazi’s headlining tournament BSS SuperStack INR 25 Lakhs GTD was the star attraction yesterday night. For a buy-in of INR 5,500, the event enrolled a total of 463 runners out of which 54 places were paid a min-cash. It was an anonymous player ‘kartoos’ who captured the tournament after defeating Arjanveer Chadha aka ‘holdbaby’ in heads-up for INR 5 Lakhs. On the other hand, Chadha added INR 3.25 Lakhs in his poker bankroll for finishing in the second place.

Adda52 hosts two major events on Sunday, a 5 pm, Big Slick INR 15 Lakhs GTD started off attracting a massive number of 619 hopefuls who grabbed their seats after paying INR 2,500. Eventually, after several hours of grinding it was an anonymous but online reg ‘NormanBates’ who defeated ‘Warning87’ in heads-up for INR 2.74 Lakhs.

The second featured tournament on Adda52, Mega Suits guaranteed INR 25 Lakhs. A total of 593 entries registered in the tournament after paying INR 5,500. The top 63 players strolled out earning a min-cash of INR 12,601. But the one to grab the lion’s share of the prize pool was 2019 December’s Millionaire Lite winner Sreekanth Narayan aka ‘n0thing’ who conquered the tournament and added another feather to his poker cap after defeating ‘Daniel90’ in heads-up to secure INR 6.96 Lakhs in prize money.

The highest guaranteed tournament on PokerStars was Sunday Special Progressive KO displayed INR 15 Lakhs GTD attracting 223 runners. A buy-in of INR 5,500 was fixed and the top 35 places received a share from the prize pool. Powering through this field was an anonymous player ‘the_ziro’ who added INR 1.84 Lakh to his bankroll after beating Neel Joshi aka ‘Worm236’ in heads-up. Joshi managed to secure INR 1.36 Lakh for resting in the runner-up position.

Other notable players receiving a paycheck include Abhinav Iyer aka ‘abhi58’ (6th), Arjanveer Chadha aka ‘ballistik310’ (20th), Kaushik Tibrewal aka ‘breadbutterjam’ (31st) and so on. For the latest updates on live and online poker tournaments keep reading GutshotMagazine.com and stay tuned!