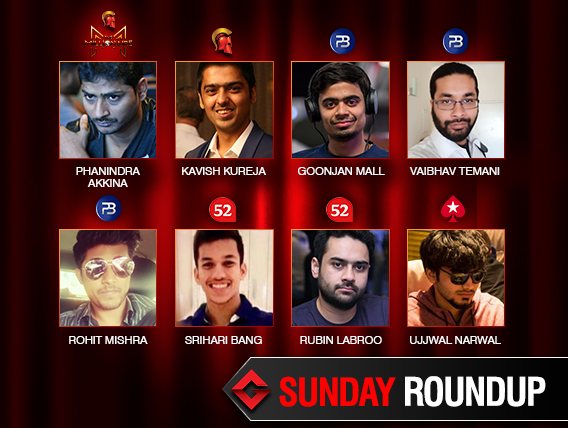 
And what a spectacular night it was across the leading online felts in the country. The top pros along with various online regs bagged the heavy bundles of prize money. The tournaments that ran until early Morning mornings had players cashing from the tremendous guarantees and of course, the most awaited Millionaire Legends also took place on Spartan Poker. So, let’s summarize the incredible Sunday majors from last night…

Following the path of Anish Patra, our latest Millionaire Legends winner is Phanindra Akkina, accomplishing the tournament and attaching the second Millionaire title to his online career. Playing under the username ‘k9akkin’, he emerged triumphant after defeating Akash Gupta aka ‘Akash0510’ in heads-up.

A fantastic night that halted after declaring the first Millionaire of December gave away the lion’s share of INR 2 Crore prize pool to Akkina. The player has had various titles attached to his name, always known to bag big titles and cash prizes attached to them.

Last night’s featured tournament on Spartan Poker was Sunday SuperStack guaranteeing an even bigger INR 40 Lakhs prize pool and observing a record-breaking field of 744 entries. The last man standing was the 2017 Deltin Poker Tournament Main Event champion Kavish Kukreja aka ‘Dietchips’ who shipped the tournament after defeating Goonjan Mall aka ‘gmtesting’ in heads-up.

Goonjan Mall aka ‘gmtesting’ who finished second in Sunday SuperStack on Spartan, didn’t back down and railed out ‘dybalamask’ in heads-up for INR 5,32,382 prize money in BSS SuperStack INR 25 Lakhs GTD on PokerBaazi. Any active player would know Mall, a regular in the online circuit. The tournament stretched for over 8 hours attracting 548 players, each one of whom registered themselves for INR 5,500 buy-in.

Some side events also took place including PMVS MegaStack Event #19 INR 12 Lakhs GTD which was shipped by well-known player in both live as well as online circuit, Kartik Ved aka ‘TheInternetKid’ for INR 2.82 Lakhs after defeating ‘raskolnikov’ in heads-up. Apart from that, Arsh Grover aka ‘Button_Hai_Bro’ took the limelight by winning the Event #20 INR 10 Lakhs GTD for INR 2.41 Lakhs railing out Rahul Pruthi aka ‘YOUAGAIN’ in heads-up.

It was a smashing Sunday on Adda52 making headlines by hosting two tournaments. One was Big Slick INR 15 Lakhs GTD kicking off at 5 pm. Topping a field of 624 entries was a well-known online grinder and the winner of Electric Big Daddy last evening on Spartan Poker, Srihari Bang aka ‘zombieballs’ attaching yet another feather to his already crowded poker cap and adding INR 2.7 Lakhs. Bang pushed Saksham Sharma aka ‘Razorfish’ in the runner-up position for INR 2 Lakhs.

The top players finishing in the money include Vishal Marwaha aka ‘Bhai9’ (3rd), Goonjan Mall aka ‘gmtesting’ (6th), Pulkit Goyal aka ‘Championplayer’(8th), Sahil Mahboobani aka ‘ImHighIshove’ (15th), Tathagata Sengupta aka ‘minter’ (16th), Honey Bijlani aka ‘ho9ey’ (25th), Wilson Yomso aka ‘Kaling’ (39th) and so on.

The second featured tournament on Adda52 is the Mega Suits INR 25 Lakhs GTD reserved for each Sunday. The event usually kicks off by 8 pm sharp. Bagging the first-place prize money was the 2019 WPT Vietnam Kickoff event runner-up Rubin Labroo playing under the username ‘kornkif’. Labroo shipped the tournament for INR 5.43 Lakhs after railing ‘gauravgupta1908’ in the runner-up position with INR 4.23 Lakhs.

Sunday on PokerStars are all about Sunday Special INR 15 Lakhs GTD, a bounty tournament which kicks off at 5 pm sharp. Each player chipped in INR 5,500 buy-in to enter the competition and eventually after long intense hours of grinding, the star of the night was popular online crusher Ujjwal Narwal aka ‘CougarHunter69 ‘pocketing INR 1.52 Lakhs. Narwal defeated ‘duckface2013’ in heads-up sending the anonymous player to the runner-up position to bag INR 1.11 Lakhs.