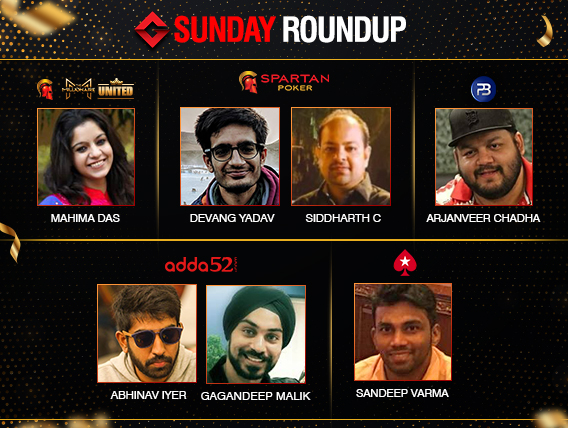 
Keeping in mind the 21-day lockdown, the virtual felts of the country came up with incredible offers for the online poker players of the country. It was spectacular Sunday night across the leading platforms as the guarantee of each was successfully surpassed. Spartan Poker came up with the first-ever Millionaire United INR 1 Crore GTD, one day tournament running alongside Sunday SuperStack INR 50 Lakhs GTD. On the other hand, PokerBaazi, Adda52 and PokerStars also crowned their worthy winners. And here is a summary of Sunday majors….

Spartan Poker launched the Millionaire United INR 1 Crore GTD and just as the name suggest, the idea was to bring all the poker fanatics of the country together. A multi-flight 1-day tournament that kicked off on 29 March at 12 pm eventually fetched 1,765 entries after each chipped in INR 7,700. The displayed guarantee was crushed to become INR 1.23 Crores and the top 191 finishers earned a share from the same. Outlasting the field at 2:32 am was Mahima Walia Das aka ‘mambojojo’ after railing out ‘lazylad’ In heads-up. Das captured the prestigious millionaire title and locked a 7-digit score!

Running simultaneously with the Millionaire United on Spartan Poker was Sunday SuperStack INR 50 Lakhs GTD last night. A total of 1,213 entrants paid INR 5,500 to enter the tournament that eventually led to the creation of INR 60.65 Lakhs in prize pool. The top 119 players ended up earning a min-cash but the one to grab the largest share of the prize pool was online grinder Devang Yadav aka ‘equity_hunter’ who defeated ‘Immortal Killer’ in heads-up to bag the first-place cash prize.

Another tournament that caught the public attention on Spartan Poker was Electric – Big Daddy INR 12 Lakhs GTD that started off at 11 pm. Eventually, a total of 619 runners logged in after paying INR 2,200 and this was enough to create a bigger prize pool of INR 12.38 Lakhs. Powering through the field was Siddharth Chaturvedi aka ‘siddchat’ who defeated Vaibhav Sharma aka ‘Nikka Zaildar’ in heads-up to grab the winner’s title.

A total of 267 runners pounced on the field of The Monster INR 5 Lakhs GTD on PokerBaazi. Out of which the top 36 players profited from a share of INR 6.67 Lakhs prize pool but the one to take away the largest chunk was circuit popular Arjanveer Chadha aka ‘holdbaby’ who grabbed the first-place prize money of INR 1.47 Lakhs after eliminating Ankit Jajodia aka ‘akj290’ in heads-up who secured the runner-up position as well as INR 1.03 Lakhs.

After seizing the The Monster at 9:52 pm, Arjanveer Chadha rode past a field of 643 entries to take down BSS SuperStack INR 25 Lakhs GTD on PokerBaazi. The tournament began at 7 pm, and Chadha who triumphed the second flagship tournament earned INR 5.93 Lakhs in prize money while his opponent Harsh Kumar aka ‘100crdream’ settled to earn the second place payout. The buy-in to the event was INR 5,500 which led to the collection of INR 32.15 Lakhs in prize pool and the top 81 finishers grabbed a share from the same.

Adda52’s Sunday flagship tourney Big Slick AF INR 15 Lakhs GTD was crushed to become INR 25.06 Lakhs after the even pulled out a massive field of 1,114 runners who paid INR 2,500 as buy-in. The WSOP bracelet winner Abhinav Iyer aka ‘checkshove’ emerged victorious after eliminating Danish Shaikh aka ‘King0fMerge’ in heads-up for INR 3.72 Lakhs in prize money while his opponent secured the runner-up position for INR 3.02 Lakhs.

Another popular tournament on Adda52 was Mega Suits INR 30 Lakhs GTD that kicked off at 6 pm yesterday. A total of 940 entries joined the create a prize pool of INR 47 Lakhs. Coming out on top was Gagandeep Malik aka ‘gaganhyd’ who took home an impressive INR 10.38 Lakhs in prize money. Malik knocked out ‘amandalia’ in heads-up who settled in the second position for INR 6.11 Lakhs.

PokerStars’ hosted Sunday Special INR 20 Lakhs GTD which attracted 468 entries after each paid INR 5,500 as buy-in collecting INR 23.40 Lakhs in prize pool. Conquering the field was a well-known circuit grinder Sandeep Varma aka ‘effuno007’ who battled out ‘tanukolhi96’ in heads-up for INR 2.08 Lakhs in first-place prize money while his opponent ended up earning INR 1.50 Lakhs.