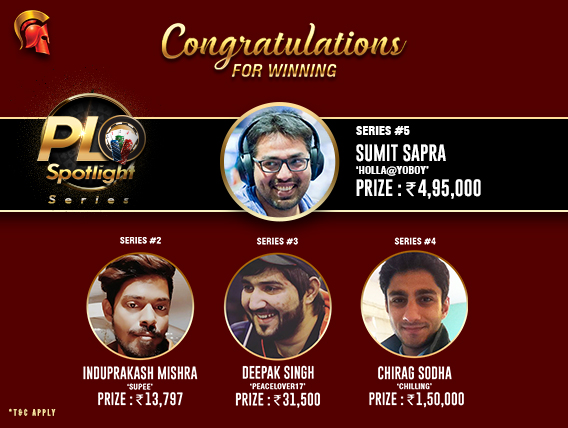 
Spartan Poker announced a whole new set of events for the month of March which included some events that were brought into the scenario for the first time. One of those was the single-day PLO Spot Light Series hosted yesterday.

Under the series, a total of 5 events were hosted between 2 pm and 9 pm with guarantees increasing successively. Acclaimed community player Sumit Sapra won the biggest and final tournament of the series, PLO HR INR 15 Lakhs GTD. Other known winners include Chirag Sodha, Deepak Singh and Induprakash Mishra. Here’s a round-up of what went on yesterday in the series:

For the lowest buy-in of the series (INR 55), this tournament attracted a total of 137 players and crossed the guarantee and resulted in INR 15,350 as the fresh prize pool. Top 20 places were paid for a min-cash of INR 205. The player to win this first PLO Spot Light tournament was ‘latelateef’ who took home INR 3,684 as first-place cash prize beating ‘rishabhd’ in heads-up. The runner-up earned INR 2,502 as the cash prize.

The second tournament in the series started at 4 pm on Spartan and attracted 104 players to the felt with top 15 getting paid for a min-cash of INR 972. For a buy-in of INR 275, the guarantee was crushed. Induprakash Mishra aka ‘supee’, previous SSS Sunday SuperStack winner, emerged victorious and took home INR 13,797 as first-place cash prize. He beat ‘CorazonDeAces’ in heads-up, who won INR 9,504 as the runner-up cash prize.

The third one attracted a total playing field of 90 players for a buy-in of INR 880. The tournament paid out the top 13 players for a min-cash of INR 2,460. Regular online grinder Deepak Singh aka ‘peacelover17’ won this event for INR 31,500 beating ‘Mein Kampf’ in heads-up, who settled for INR 22,080 as second-place cash prize.

Singh is a regular player on all platforms and has titles to his name like Judwaa, Go Goa on Adda52 and Mega Freeze on Spartan which he won in February last month. He is also a strong live player and was leading on the Final Table in the recently hosted WPTDS India Main Event, where he ultimately finished 4th for INR 22,07,000.

The final hand was a pre-flop all-in situation. Sodha, with 6d 3d Kc 3h made a set of Threes on the board of Jh 5h 3c 6c 4d and beat JuntaDel’s two pairs of Jacks and Sixes to ship the title and the first-place cash prize. Sodha recently won the inaugural Saturday Social on Spartan last week and has seen many deep runs and wins before. He had won 9stacks Sunday Stacks last December for a cool INR 3.825 Lakhs too. He is in top form and will be looking to carry it forward in coming months too.

The last event of the series was also the biggest and attracted a good field of 74 entries (including 16 re-entries and 24 re-buys). The tournament was a High Roller and had a buy-in of INR 22,000, which ensured the pros and top talents in contention. Top 7 places were paid in the event for a min-cash of INR 75k.

Sumit Sapra aka ‘holla@yoboy’ won the event and took home INR 4,95,000 as first-place cash prize after beating ‘westworld’ in heads-up, who settled for INR 3,90,000 as the runner-up amount. Sapra beat westworld with a set of Aces in the final hand. After the flop of Qs Ks Ad was revealed, westworld shoved his stack with Js 5d 5s As, making Aces on board.  Little did he know that Sapra had one-upped him and made a set. Sapra called and the game was over. The turn and river of 6h and 9c proved indifferent and Sapra secured the title.

Sapra’s record is enormous. He has been playing since a long time on both online and live felts and has cashed in many of them and won too. He was along the 8 Indians who went to Bahamas to play for the hyped PSPC by winning a free Platinum Pass. He’ll be looking forward to continuing his winning trend in coming months. We caught up with Sapra who had this to say about yesterday’s win. “The 3-handed play of was pretty swingy and stretched on for a bit. It’s been a while since I won a PLO tournament so it obviously feels good.“

Since it was an HR event, only the cream of the crop were in the field. Some of those who ranked in the money included Siddarth Singhvi (4th – INR 1,50,000), Gaurav Sood (5th – INR 1,05,000) and latest Spartan Millionaire winner Joey Saha (7th – INR 75,000). Many other top names of the community like Aditya Sushant, Nishant Sharma, Rubin Labroo, and others were in the field but didn’t make it in the money.

Keep reading GutshotMagazine.com for more such tournament results, updates and for your daily dose of poker news from across the planet.