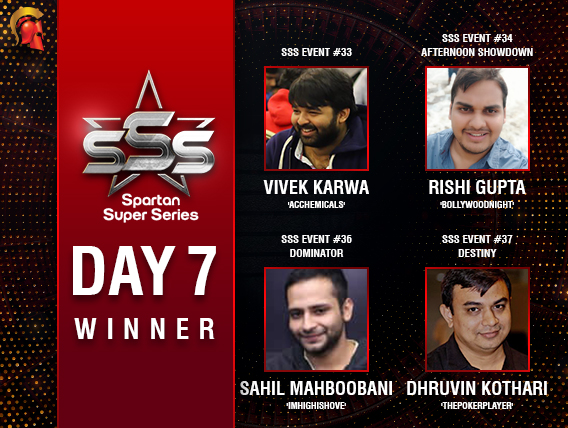 
The highly exciting monthly Spartan Poker Series (SSS) which assures INR 7+ Crore GTD is nearing its end. Yesterday completed six tournaments successfully as the guarantees of each one was easily surpassed and we had two players who won their second SSS titles too! And here is a complete summary of SSS Day 7…

INR 330 was the buy-in to enter the first tournament of SSS Day 7 which kicked off at 12 pm sharp. Eventually, a total of 428 entrants joined the field to grab the biggest share of INR 1.28 Lakhs prize pool. Taking home the lion’s portion of the same was online reg Vivek Karwa aka ‘acchemicals’ who defeated his opponent ‘rashi001’ in heads-up with his two pairs of Aces and Eights and seized the title.

Clinching his second title after already triumphing on SSS Day 5, Rishi Gupta aka ‘BollywodNight’ attached the Afternoon Showdown title yesterday. The second event began at 2 pm and by the end of registration, a total of 367 entrants pounced on the field, paying INR 660. This number led to the creation of a bigger prize pool of INR 2.20 Lakhs and the top 31 finishers ended up locking at least INR 1,937 as min-cash. Gupta eliminated ‘last chance’ in heads-up after hitting flush on the river and added another title to his poker CV.

The buy-in and guarantee gradually kept increasing to become INR 1,100 and INR 3 Lakhs GTD respectively. ‘Greko’ who preferred to stay anonymous, outlasted a field of 336 entrants and secured the lion’s portion from INR 3.36 Lakhs prize pool after the players settled for a 3-way deal and ‘Greko’ carrying the largest stack of 1.22 million was announced the official winner while ‘Speedpost09’ ended up earning the second place payout and ‘pokz’ finished in the third place.

Spartan Poker’s first featured tournament Dominator attracted 356 runners out of which only 31 managed to finish in the money. Each of these players secured INR 6,265 as a min-cash, a share from INR 7.12 Lakhs prize pool. A well-known circuit grinder, Sahil Mahboobani aka ‘ImHighIshove’ captured the winner’s prize money only after defeating ‘royalking111’ in heads-up and secured the 6-digit figure.

January edition’s IOPC Millionaire champ, Dhruvin Kothari aka ‘thepokerplayer’ rode past the field to earn the hefty prize money in Destiny INR 35 Lakhs GTD, a popular Wednesday tourney on Spartan Poker. Kothari battled against a massive 754 entries and secured the largest portion of INR 37.70 Lakhs prize pool which surpassed the advertised guarantee. The tournament ended after he beat ‘GoldSpot’ in heads-up who eventually earned the second place payout.

SSS Day 7 wrapped up with the final event being the third feature Mega Freeze INR 5 Lakhs GTD. A total of 172 entrants took to the field after each one chipped in INR 3,300. The advertised guarantee was surpassed, collecting INR 5.16 Lakhs in prize pool. It was SSS Day 6 winner ‘Isildur5292’ to come out on top after defeating circuit reg Ankit Wadhawan aka ‘Shippament’ in heads-up with his Ace high King kicker.