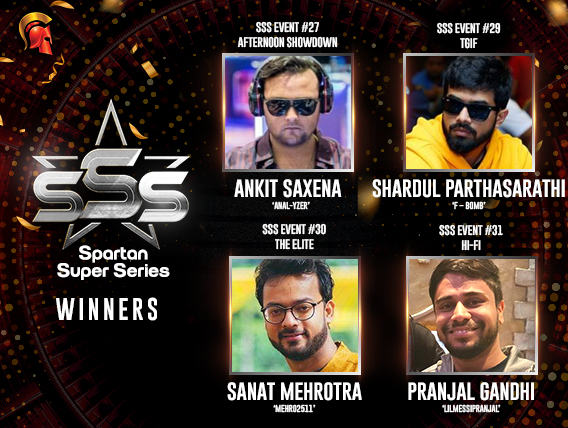 
Yesterday wrapped up another action-packed day of the Spartan Super Series (SSS) on Spartan Poker which is closer towards its end. Yesterday hosted two Friday featured tournaments namely TGIF and The Elite followed by the ultimate and December edition’s SSS Millionaire for an incredible INR 1.5 Crore GTD! Here is a complete summary of SSS Day 5…

The first tournament of the day began with 333 players entering for SSS Day 5’s lowest buy-in of INR 550. Only the top 27 players finished in the money and each one receiving a portion from the prize pool. However, it was ‘supee’ who ended in the first place after the players struck a 5-way deal and ‘supee’ carrying the largest stack of 574k emerged as the official winner. The champion was followed by the runner-up, another anonymous player ‘KittyGo’.

The buy-ins and the guarantee always increase in the Afternoon Showdown. 178 players paid INR 2,200 to take their seat in the tournament. And only a handful of 15 could cash, a slice from the prize pool. However, the tournament ended with a 3-way deal and Ankit Saxena aka ‘Anal-yzer’ was seen to bag the first-place prize money owing to his largest stack of 578k. Behind the winner rests Neeraj Kumar aka ‘SelfClaimedPros’ and in the third-place ‘sttoned’.

Afternoon Hi-Fi is the third tournament on any given SSS day. Recording a field of 299 player, each one chipping in a buy-in of INR 1,100. Before the tournament concluded, the prize pool was split among the top 24 players for a min-cash of INR 3,000. It was ‘thepokerbrat’ who finished in the first place after the players cut a 3-way deal. Carrying the largest stack of 864k, ‘thepokerbrat’ walked out with the winner’s prize money.

Two featured tournaments take place on Friday night on Spartan Poker, and one of them is TGIF INR 12 Lakhs GTD. Observing a record-breaking field, the tournament pulled out 741 players for a buy-in as low as INR 1,650. Riding past this massive field was Shardul Parthasarathi aka ‘F – Bomb’ who emerged as the ultimate winner last night eliminating ‘Optimist’ in the runner-up position.

In level 49, the players approached the final hand, Parthasarathi (7c 9d) had the larger stack of 6 million up against ‘Optimist’ (6c Kh) with 1 million chips. 4d 6s 7h on flop, the latter checked while the former bets 80k for his pair of Sevens. Once again ‘Optimist’ checks on turn Qc but Parthasarathi bets 240k and eventually his opponent puts his entire stack in the middle. 8c on the river, the players flipped their cards and Parthasarathi took the winner’s title and the healthy prize money. To read more, click here.

The second last tournament of the day came in with the highest guarantee of INR 30 Lakhs drawing 264 players. Powering through this field was a well-known circuit grinder Sanat Mehrotra aka ‘mehro2511’ shipping the tournament after beating another online crusher Vaibhav Sharma aka ‘Nikka Zaildar’ in heads-up.

In level 47, Mehrotra held Js Qs up against Sharma with 2d Kd, both players check on flop 5s 7s 2s. Turn Qh saw the former put 68k bet having a flush and got a call from his opponent. The latter checks once again on river card 2h while Mehrotra bets another 233k, and eventually Sharma goes all-in for his trip Twos. That’s when Mehrotra champions the event strengthening his poker bankroll with an incredible amount. To read more about the tournament, click here.

For a buy-in of INR 2,200, a total number of 234 players entered the final event on SSS Day 5. The top 21 places received a paycheck of min-cash INR 7,500. Online crusher Pranjal Gandhi aka ‘lilmessipranjal’ finished in the first place and added another title to his already crowded poker cabinet. The tournament came to an end after a heads-up deal, with Gandhi carrying the larger stack of 1 million chips pushing away his opponent ‘nsfw’ to the runner-up position.

The December edition of SSS Millionaire is here promising a whopping INR 1.5 Crore! And yesterday wrapped up Day 1A of the multi-flight tournament that saw an anonymous but online reg ‘propernit’ bagging the largest stack of 3,44,118 followed by another leading player Rajat Sharma aka ‘Garammasala’ bagging 2,52,072. Only 54 survived out of 432 players who will now be heading to Day 2.

Day 1B of the tournament is scheduled to begin today, 14 December 6 pm local time followed by Day 1C on 15 December. All the survivors will meet on the final table that is Day 2 on 15 December. To know more about SSS Millionaire, click here. For latest updates on live and online poker tournaments keep reading GutshotMagazine.com and stay tuned!