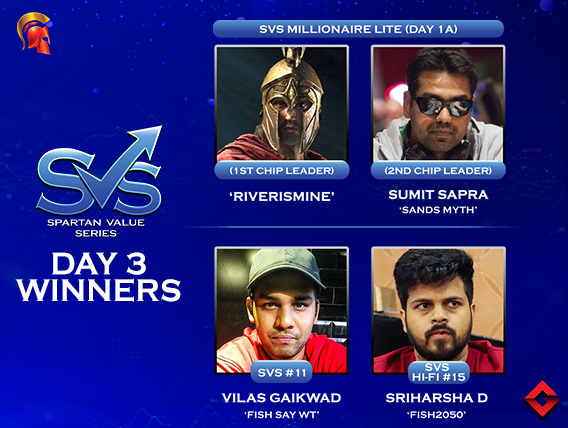 
The 5-day long tournament series and the February edition’s Spartan Value Series (SVS) is currently underway on Spartan Poker promising INR 50+ Lakhs GTD. While yesterday was reserved for another 5 tournaments, the major attraction was Millionaire Lite promising INR 10 Lakhs to the first-place finisher. And here is a complete summary on SVS Day 3…

The first tournament of the day enrolled 289 runners for INR 165 buy-in which collected INR 43,350 prize pool. The top 23 places finished in the money, earning a payout, but the one to take away the largest chunk from the final prize pool was Vilas Gaikwad aka ‘fish say wt’ after the players struck a 4-way deal which saw ‘Krazy8’ settling in the runner-up position.

With a buy-in of INR 550, a total of 171 entrants pounced on the field. The tournament that kicked off at 3 pm and lasted for several hours until ‘Smokijoejr’ emerged as the official winner. In level 26 of the tournament, the players settled for a 3-way deal which saw Vaibhav Lohia aka ‘CharlieOnTilt’ in the second position.

The buy-in and guarantee went down the ladder in the third tournament hosted at 5 pm. A total of 127 entrants joined the field after paying INR 275 each. In level 26, ‘Akdiamonds’ defeated ‘Ro$a’ with his two pairs of Queens and Three over his opponent’s single pair of Queen, thus claiming the first-place prize money of INR 8,731.

February edition’s Millionaire Lite is here with buy-in as low as INR 1,650. The tournament assures INR 10 Lakhs to the player who conquers the entire field. This multi-flight tournament pulled out a total of 620 entries on Day 1A. After 4+ hours of grinding, only 61 survived with ‘riverismine’ topping the day and amassing 1.72 million chips. The chip in-charge is followed by Sumit Sapra aka ‘Sands Myth’ with 1.71 million chips in the second position.

An anonymous player ‘bml2012’ topped the field in event 14 of SVS. A total of 145 entries were garnered but the payout could only reach 13 places, locking at least INR 2,562 min-cash. In level 25 of the tournament, the players struck a heads-up deal and ‘bml2012’ secured the first-place prize money while Ram Kakkar aka ‘TheLagLawyer’ settled in the second position.

This man needs no introduction, Sriharsha D aka ‘Fish2050’ outlasted a field of 293 entries to ship the final tournament of SVS Day 3 on Spartan Poker. Out of the 200+ entries only 24 managed to earn a paycheck of min-cash INR 4,395. Sriharsha defeated ‘notoriusB.I.G’ in heads-up when he rivered a straight. The champion eliminated ‘notoriusB.I.G’ in the second position who failed to dominate him with his two pairs of KK77.

Day 1B of Millionaire Lite starts today, 22 February at 6 pm, so stay tuned to GutshotMagazine.com for more updates online and live poker tournaments.