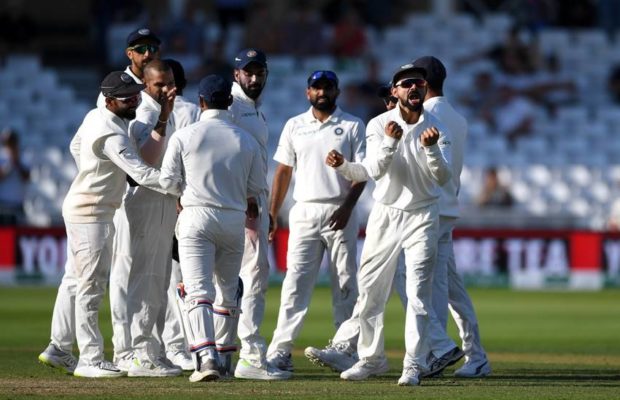 
India set England a massive target of 521 runs to win the 3rd Test of the series, and it was going to take a world-record chase for England to even get near this target. They began Day 4 of the Test match at 23/0 and it was never about the runs that England needed to win, but all about the wickets India needed to win.

The Indian pacers then struck early, reducing England to 62/4 and it was now just a matter of time before India pulled one game back after trailing 0-2 in the series early on. However, what followed was a tremendous comeback by England, thanks to brilliant efforts from Ben Stokes (62) and Jos Buttler (103), who registered his maiden Test century.

Just as England fans were daring to believe in their batsmen, Jasprit Bumrah was introduced into the attack, who struck twice in two balls and England were at 231/6. The wickets fell regularly from there on, as England ended Day 4 on 311/9, with Adil Rashid and James Anderson at the crease.

India took the extra half hour to take a wicket and get an extra day off, but they weren’t able to get that last wicket. However, it was only about ten minutes into Day 5 that India finished the game, winning by 203 runs – their third biggest ever Test victory against England, with Bumrah ending with 5/85.

There were talks of how it was rare that Ravi Ashwin ended a match going wicketless, but he picked up the last wicket of Anderson, leaving that as the only wicket falling to spin for India in this game. 19 wickets to pacers is another record for India, something they have only done once before, when they picked 20 against South Africa earlier this year.

The Man of the Match award undoubtedly went to Virat Kohli, who scored 200 runs (97 and 103) in this game, while also registering the most runs by an Indian captain in a Test series in England, with 2 full games still to go. He also overtook Ganguly to become India’s second most successful Test captain (21 wins), with only MSD ahead of him (27 wins). When accepting the award, he said, “We as a team want to dedicate this win to the flood victims in Kerala.”