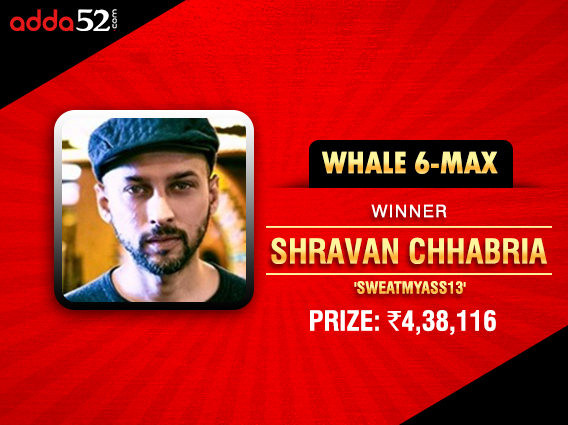 
Sharavan Chhabria is on a roll lately, especially on Adda52. Just this month, he shipped tone of their biggest guarantee tournaments, their Sunday’s Adda52 Millions INR 20 Lakhs GTD for upwards of INR 5.2 Lakhs, which attracts a huge field from across India, also some of the top players, making the field a highly competitive one.

Before that, he even won the Adda52 Maverick, its feature tournament of Wednesday,  in late November this year for over a Lakh. Yesterday, Adda52 Whale 6-Max INR 15 Lakhs GTD, also saw him ship the title and the 1st place cash prize of a staggering INR 4,38,116 out of a total playing field of 233 entries (71 re-entries). The field collectively broke the original guarantee and created a fresh prize pool of INR 15,96,051 for a buy-in of INR 7,500 each.

The tournament began yesterday on Adda52 at the usual 8 pm and was in the books by 4:01 am today. The eventual champion played a gruesome grind of 8 hours to bag his well-deserved win. Chhabria, playing under the handle ‘sweatmyass13, beat ‘gameank123’ for the title, who had to settle for the runner-up cash prize of INR 2,55,368 – not a bad amount at all.

Filling the 3rd position was another well-known player who has also been playing phenomenally lately, Abhishek Garg aka ‘thegrinder’. He also took home a sizeable amount of INR 1,91,526 as 3rd place cash prize in Whale yesterday. Garg did a back-to-back on 9stacks yesterday, shipping Thursday as well as Wednesday Stacks. He also won PokerBaazi’s 3 Lakhs GTD tournament yesterday playing simultaneously on their platform.

The champion Chhabria, has plenty of online cashes in online and live poker.One of his biggest online cash outs include winning the 2.o.K on Spartan in July this year for a whopping INR 15 Lakhs. He has cashed out big in live events as well, one of them being his biggest live cash of $32,130 (~INR 22.46 Lakhs) at 2016 World Series of Poker (WSOP) Main Event in Las Vegas. The last month especially has been brilliant for Chhabria, and he has ended the eyar beautifully, with this latest victory.

Gutshot got in touch with him after the tournament ended. He was obviously satisfied with the win and with his other big wins in the recent past. He commented, “Well, it feels great to ship the Whale 6-Max on Adda52. I’m looking forward to the last few days of the leaderboard. Good luck to all.”

The field was relatively soft on Adda52 yesterday, featuring only a couple of regulars in the money. One of them was S Saravanan aka ‘SIDDHU24’ who finished 10th for INR 27,931. The recent Adda52 Millions winner Ankur Sehgal aka ‘Aceleration’ also cashed out at 23rd for INR 13,566, out of the top 24 places paid.

Keep reading GutshotMagazine.com for tournament updates, announcements and general poker news from around the world.