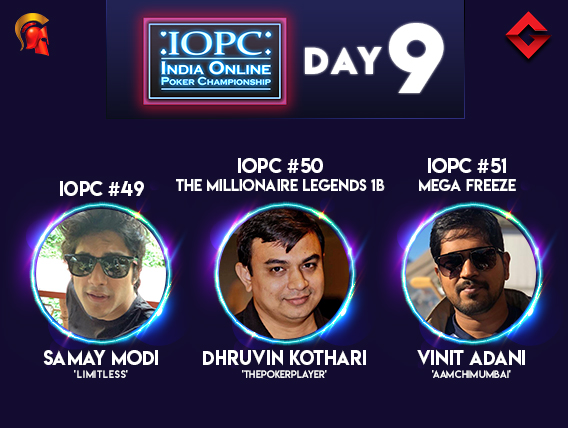 
The India Online Poker Championship (IOPC) is more than halfway through and so far, we’ve had quite a few new winners being crowned, while older faces have also walked away with prestigious titles. Yesterday was the weekend for most but for poker players in India, there was big money up for grabs on IOPC Day 9. A total of 5 tournaments were scheduled through the day on Spartan Poker and you can get a complete summary of IOPC Day 9 here…

The first tournament was the smallest buy-in of the day, with INR 550 being the entry fee. A decent field of 876 entries and the prize pool was taken up to INR 4,38,000 which was then divided among the top 63 players with a min-cash of INR 1,905. At the end, it was ‘Immortal Killer’ against ‘FunkeyFox’ in heads-up and the former shoved with K♠ 8♦ only to get a call from FunkeyFox who showed T♣ A♣ and hit a pair of Aces on the board to win the title!

The second event of the night had a buy-in of INR 1,100 and once again, the guarantee was passed by a big way, with 495 entries joining and the prize pool of INR 4,95,000 being shared by the top 39 spots. It was a tough fight till the end where Samay Modi aka ‘Limitless’ ended up outlasting Vivek SIngh aka ‘KasolHieghts’ in heads-up. Way ahead in chips, Modi shoved with T♥ 9♦ in the final hand and Singh called with 8♥ A♣. Modi was fortunate to hit a Ten on the flop which gave him the pot and of course, an IOPC title on Spartan Poker.

The biggest buy-in Millionaire called Millionaire Legends saw 369 entries joining on Day 1A with Abhineet Jain in the lead. Again, everyone paid the INR 27,500 buy-in on Day 1B where a total of 255 entries registered and INR 63,75,000 was added to the tournament prize pool. At the end of the scheduled levels of play, we had Dhruvin Kothari aka ‘thepokerplayer’ who took the chip lead with a bag of 364k chips, closely followed by Navkiran Singh aka ‘JaiBalaji’ who progressed to Day 2 with 322k. They lead 41 survivors from Day 1B.

Mega Freeze is a weekly feature on Spartan and this freezeout format is extremely popular among Indian poker players. With a buy-in of INR 5,500, 215 players registered to beat the guarantee and the new prize pool of INR 10.75 Lakh was eventually shared by the top 31 positions of the night, each taking away a minimum of INR 9,460. However, only one can end as the winner and last night, it was Vinit Adani aka ‘Aamchimumbai’ who won a handsome prize amount to go with an IOPC title. In the final hand, he hit Aces and Sixes over a pair of Aces held by his opponent ‘ManiacKid’.

Hi-Fi is always the last tournament to kick off on any IOPC day on Spartan Poker. It’s one of the most popular offerings on Spartan and last night too, 611 entries registered to beat the guarantee and create a prize pool of INR 12.22 Lakh, with each entry paying INR 2,200 to register. Ultimately, it was Ravi Jain aka ‘Rvjn91’ who ended victorious, winning his second IOPC title of this series after he beat Naresh Veeravalli aka ‘FreeFlow’ in heads-up.

For more updates on the ongoing India Online Poker Championship (IOPC) and other tournaments from India and across the world, stay tuned to GutshotMagazine.com.