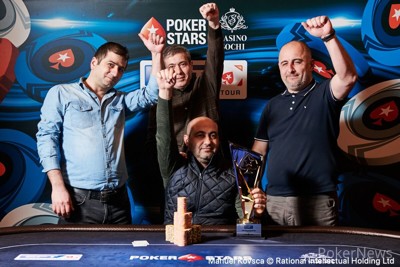 
The 2019 EPT Sochi went into the books yesterday with the RUB 371,000 EPT High Roller declaring its champion at Casino Sochi, Russia. The buy-in for the event was a massive one and hence attracted the cream of the crop to its felts. Kartik Ved and Aditya Sushant were also among the 84 runners in the event.

Only the top 11 places were paid. Ved and Sushant played great but unfortunately couldn’t figure in the top 11 and didn’t receive a pay-check. The player to emerge on top was Azerbaijan’s Rushad Iskandarov for RUB 7,840,000 (~INR 83.01 Lakhs) as the first-place cash prize. Interestingly, the winner found himself pitted against Elvin Sarkarov who also hails from Azerbaijan.

The third and the final day of the EPT Sochi HR began yesterday and 9 finalists were contesting for the top prize on the day. Early on, there were a slew of eliminations. Daniil Kiselev busted on the first hand of the day. Isrhat Shaykhov busted later by the hands of Maksim Bukreev.

PSPC Champion and PokerStars Pro Ramon Colillas hit the rail next at 7th for RUB 1,368,500. Gradually, the Azerbaijani heads-up battle was reached between after several late eliminations. For over three hours, the two contested tooth and nail for the first-place cash prize.

In the final hand, Sarkarov was eliminated after bluffing all in on the river with a pair against Iskandarov’s trip Fives. Sarkarov settled for RUB 5,579,000 (~INR 83 .01 Lakhs) as runner-up cash prize. Iskandarov commented after his win, “To be honest it was very, very stressful! It was challenging to be playing against such good players.”