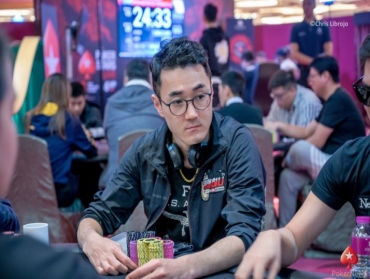 
With a number of flagship series taking place around the world, this has been quite a busy week in the world of poker. Indians have been scattered, swinging from one destination to the other and yesterday was another eventful day for the representatives of the country as the 2020 Red Dragon Manila Main Event wrapped up Day 2 in the dazzling Okada Manila.

The advertised Main Event guarantee of PHP 50,00,000 was surpassed after collecting 669 buy-ins, generating a bigger prize pool of PHP 64,244,070 which was benefited by the top 81 players. After three starting flights, we had an overall chip leader from Day 1B South Korea’s Hwany Lee who amassed an impressive stack of 303,500 and led 212 surviving players into Day 2.

It took hours of grinding session until Jehun Hong who missed out the chip lead on Day 1B by a mere 500 chips, accumulated the biggest stack of 1,910,000. Closely following his heels were China’s Yufei Hui with 1,140,000 chips and in the third place is Germany’s Piet Pape with 1,015,000 chips.

While the Indians were intent to watch their fellow countrymates on the casino floor, unfortunately, all 5 contenders busted. Early to eliminate were Sumit Sapra and Dhaval Mudgal while Day 1A chip leader Sahil Agarwal settled in 45th place for PHP 283,000 (~INR 3.98 Lakhs), Ankit Ahuja in 49th position for PHP 257,000 (~INR 3.61 Lakhs) and Kanishka Samant rested in 74th place with PHP 206,000 (~INR 2.9 Lakhs).

Though the top 34 players were assured at least PHP 308,000, Florencio Campomanes who already won the 2019 APPT Manila is still looking forward to seizing the lion’s share of the prize pool. And yesterday he also became the first player in 2020 to have won a Platinum Pass for the PSPC in Barcelona in August. Other notable players to progress to Day 2 include brothers Alan Lau with 779,000 chips and King Sing Lau with 682,000 chips, the current 2020 Red Dragon Manila Turbo winner Sandro Bruni with 377,000 chips and so on.

With only 34 remaining players to return to the casino floor who will start with Level 21 and continue until the final table of nine players has been reached.

So stay tuned to GutshotMagazine.com for the latest updates on the Red Dragon Main Event and other tournaments around the world!