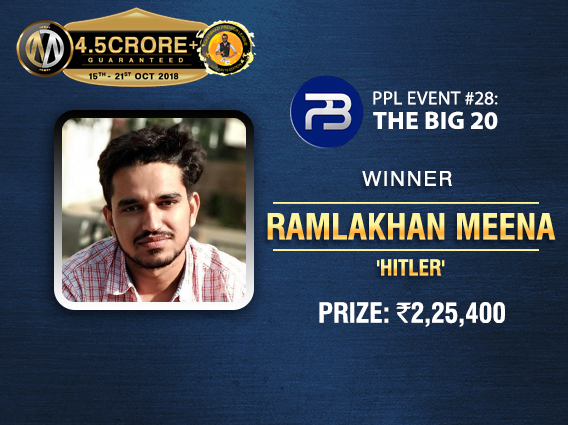 
Another guarantee-crushing day. Another tournament. Another new winner. That’s been the daily routine of the PokerBaazi Premier League (PPL) Autumn edition that has been taking place since the last 6 days. Yesterday was PPL Day 6 and a total of 4 tournaments were played during the course of the day.

Earlier in the day, we reported a successful outing for Abhinav Iyer aka ‘griezmann’ who bagged two titles yesterday and made massive additions to his poker bankroll. Another player who bagged a big win last night was Ramlakhan Meena who plays under the name ‘Hitler’ on PokerBaazi.

Hitler is a name you must’ve come across plenty of times on PokerBaazi and yesterday was one of his biggest wins on their platform, shipping PPL Event #28: The Big 20 INR 10 Lakh GTD. Played in the much-favoured 6-Max format, the tournament saw a total of 322 entries (175 registrations + 147 re-entries).

This was the final tournament of PPL Day 6 and Meena came out on top of this field after a long grind that ended in the early hours of today morning. The top 27 players were paid out from the INR 11.27 prize pool and Meena took home the largest chunk of this prize pool, winning INR 2,25,400 for first-place.

Meena made a big addition to his poker bankroll and this would be a major boost for him ahead of the final day of the series which will take place today. With the BSS tournaments and the mega Main Event (MoneyMaker) scheduled for today, Meena will have his eyes on bigger prizes as well. In this particular tournament, he beat ‘AilaGaya’ in heads-up, who won the runner-up prize of INR 1,69,050.

If you remember well, Meena has made big cashes on other Indian poker platforms as well, the most notable of which was winning the IOPC Destiny title in July this year. Keep reading GutshotMagazine.com for more updates from the PokerBaazi Premier League.