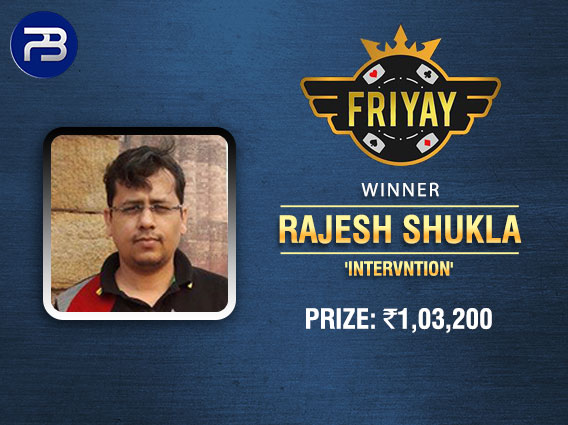 
Sometimes, you just know you are on a roll in the game of poker and at that time, the more volume you put in, the better will usually be your rewards. Currently, one player on a good run in online poker is none other than Rajesh Kumar Shukla, who last night added another title to his list of achievements.

The run started earlier this month on Spartan where a player called ‘Narammasala’ shipped the SSS Elite (Lite) title. The player’s consistency was remarkable in that SSS series, which led him to topping the SSS Leaderboard as well, taking away an added first-place prize of INR 4 lakh. This win was when Shukla decided to reveal his Narammasala identity.

This run then extended to other poker platforms in India, last week chopping The Bout on PokerBaazi, where he plays under the name ‘intervntion’. He finished second in the tournament, but an offline deal between the two saw them sharing the prize money equally. A few days passed, and Shukla has won himself the FRI-YAY INR 5 lakh GTD tournament on PokerBaazi too.

This is one of PokerBaazi’s newer tournament offerings with a buy-in of INR 1,650 and a total of 344 entries registering. The top 27 players were paid out INR 6,570 in this tournament and Shukla outlasted all these players to ship the tournament and take away INR 1,03,200 in prize money, making him the only to score a 6-figure cash in the tournament.

He beat ‘VanielNegreanu’ in heads-up who settled for INR 77,400 for finishing second. Gutshot caught up with Shukla after this victory and he said, “Superb structure and high-value games on PokerBaazi and the moment. It’s a nice experience playing on the new platform. I’m looking forward to playing and winning more and more.”