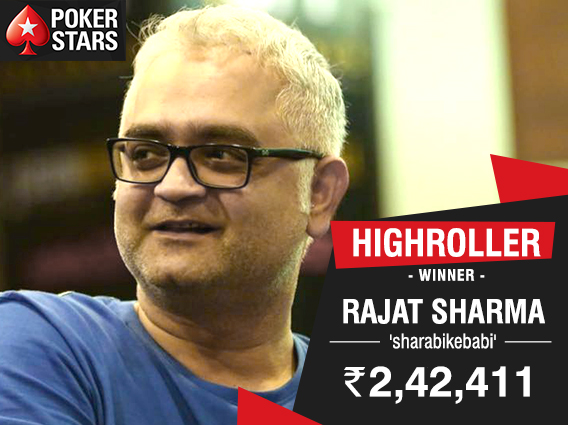 
PokerStars India, the Indian arm of the worldwide giant PokerStars, began its operations in April last year and have gone on to host some interesting offerings since then. They even signed Nawazuddin Siddiqui as their brand ambassador a few days ago in an effort to strengthen its presence in the market.

One of their big weekly tournaments is the Highroller INR 12 Lakhs GTD which is hosted every Thursday for a buy-in of INR 7,700. Last Thursday saw the tournament gather a field of 169 entries (including 73 re-entries). The tournament began at 8 pm in the evening and was in the books by 2.51 am today morning. The top 27 places got a pay-check for a min-cash of INR 13,678.

Rajat Sharma aka ‘sharabikebabi’ emerged victorious in the tournament and grabbed the lion’s share of INR 2,42,411 as the first-place cash prize after beating ‘bullzeyepower’ in heads-up. The runner-up eventually settled for INR 1,80,871 as the second-place cash prize, who had fired two bullets to secure his position.

Coming to the winner, Sharma is a well-known community entity who has cashed in a lot of tournaments in the past. His online record features top wins like Spartan Mega Stack, which he won last December and the Adda52 Mega Suits in January this year. He was also among the Destiny 7.0 finalists on Spartan, but the coveted Europe package eventually went to Sriharsha Doddapaneni.

We spoke to Sharma after his win and he said, “I enjoy playing on PokerStars India, and playing this tournament was especially fun since the Highroller is of my favourite MTTs. I am happy that I won the tournament and am hoping to carry the trend forward! Cheers!“

Only 5 re-entries were allowed in the tournament, but Sharma managed to bag the title and the cash prize with no more than one bullet. He will be looking to win upcoming feature tournaments on all leading platforms in coming months.

Some of the regs who god paid on PokerStars India on the day were last night’s Sunday Stacks winner Rubin Labroo aka ‘kornkid4’ (17th – INR 18,007), Pranav Khandalkar aka ‘pkpok13’ (19th – INR 15,694), Sagar Choudhury aka ‘sagarpupull’ (26th – INR 13,678) and others. Keep reading GutshotMagazine.com for more such tournament results and updates.