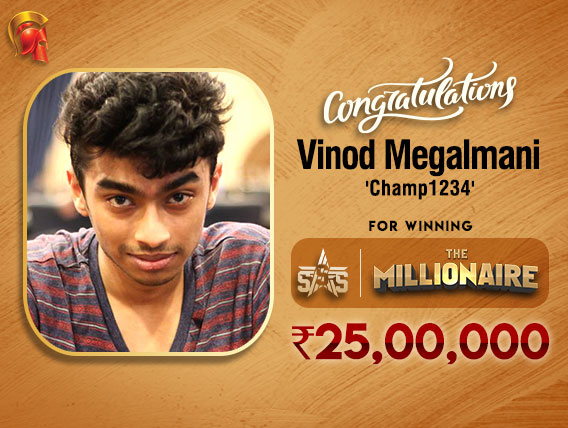 
The Spartan Super Series (SSS) December Edition kicked off last week and ran between 12-16 December, with INR 3+ crore on offer during this period on The Spartan Poker. Plenty of winners emerged in the 26 scheduled tournaments where an INR 5 lakh GTD SSS Leaderboard was also hosted, with the top 5 most consistent players being awarded additional prizes.

The final day of the series was played yesterday, and the highlight tournament of the day was none other than the SSS Main Event which was Spartan’s signature tournament – The Millionaire INR 1 Crore GTD, which ran simultaneously with the other side events of the day, where four winners were crowned.

The mega Main Event kicked off at 6pm last evening, with a massive field of 1,658 entries registering to the tournament, each paying the INR 5,500 entry fee. This is one of India’s biggest online poker tournaments and every player across the country dreams of coming out on top of this one, but alas, only one hero emerges every month.

This month, it turned out to be Vinod Megalmani aka ‘Champ1234’ who has won plenty of times on Spartan, with almost all major tournaments in his pocket. Sacrificing on a whole night of sleep, he outlasted the entire field and was awarded the gigantic cash prize of INR 25,00,000, claiming his big online cash ever.

Quite a few pros from were a part of the field, from which only the top 145 players finished in the money with a minimum cash prize of INR 15,000. Some of the Spartan regulars who took away min cashes on the night included Mayank Jaggi (141st), Bhanu Prakash (140th), Rajat Sharma (129th), and Rubin Labroo (126th).

This turned out to be one of the longest grinds ever, ending at 7:40am this morning, a time when most people wake up to head to work in India. Along the way, the intensity increased along with the blind levels, with some more known names cashing out. These included June 2018 Millionaire winner Bunty Batra (120th), Sumit Sapra (109th), Goonjan Mall (107th), Ratul Steves (82nd), SSS Leaderboard winner Rajesh Shukla (81st), Anirban Das (75th), Vivek Rughani (51st), Sahil Agarwal (46th), Zarvan Tumboli (41st), and Anant Purohit (35th).

All through this time, Megalmani was unperturbed with the eliminations taking place around him, with his eyes fixed on the prize for first-place. Usually a cash-games player, Megalmani only plays the bigger tournaments on The Spartan Poker, and he would’ve been a very happy man this morning.

The players were identical in chips at one stage, both having 12 million chips each before the final hand. The tournament ended in great style as Megalmani was dealt pocket Aces. He shoved all-in pre-flop and Suri called with Ad 8d, as the board opened three Tens and Megalmani completed a full house. Suri too was awarded well with INR 14,70,000 for finishing second.

Gutshot caught up with Megalmani after he completed this amazing victory on Spartan. Talking about the tournament, he said, “I don’t remember any tough competitors but in the last couple of tables, everyone was just flipping so I just had to pick my spots. Probably the only FT I’ve played where short stacks were putting pressure on the big stacks. The structure was so good the guy who came in 2nd place fell asleep while we were playing heads up.”

He mentioned that everyone in his family was pretty happy with this victory and that he would probably buy some Bitcoin with this prize money. He also added, “I started believing I could win it right from the second I registered. In The Millionaire, I’ve come in the top 50 the last 5 times and the 6th time was the charm. I’ve also won every single tournament on Spartan except HR and Destiny. In time, even that will change.”

GutshotMagazine.com congratulates all the winners in this edition of the Spartan Super Series and you can keep following this space for more updates on India’s top poker tournaments, both live and online.