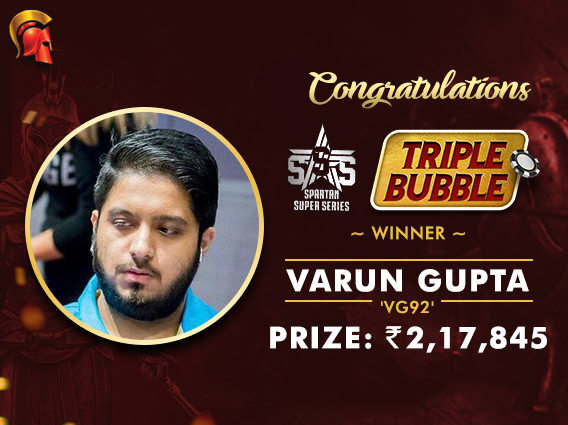 
The cash-rich Spartan Super Series (SSS) is underway at the moment, with Day 3 being played out yesterday on Spartan Poker. A total of five tournaments were scheduled during the day, with a couple of high-value ones being a part of the line up as well. One such event was SSS #15 Triple Bubble INR 12 Lakh GTD.

The tournament kicked off at 7:30pm last evening and the grind went on for nearly 6 hours, eventually coming to an end by 1:20am this morning. It takes a lot of skill to emerge victorious in a SSS tournament as only the best in the business usually take part. However, Varun Gupta is one of the best too, and he proved it again last night, taking away the title after beating a strong field of 431 entries.

Gupta has plenty of major victories online and last night, he added another trophy to his cabinet, shipping the Triple Bubble tournament for a bankroll addition of INR 2,17,845. Gupta plays as ‘VG92’ on Spartan and yesterday, he was up against a very tough opponent, so the two decided it was better they strike a heads-up deal and take away similar prizes.

He played Abhishek Rathod aka ‘icmizer’ in heads-up and both were almost identically stacked when they made the deal. Gupta won the last pot of 100k and they decided to call it a night, with Rathod winning a prize of INR 2,13,758. Both would’ve ended the night on a happy note, each taking away decent cash prizes.

The tournament had a buy-in of INR 3,300 and yesterday, the guarantee was passed to create a prize pool of INR 12.93 Lakh, which was ultimately shared among the top 39 places with a minimum cash prize of INR 8,921. Among the known names to cash were Zarvan Tumboli (13th), Nadeem Basha (17th), Anirban Das (18th) and others.

Many more tournaments are lined up in the series and the likes of Gupta and Rathod will be looking to make more deep runs, and contest for the SSS Leaderboard as well, where INR 5 Lakh is waiting to be won in prizes. For more updates on the series, keep reading GutshotMagazine.com.